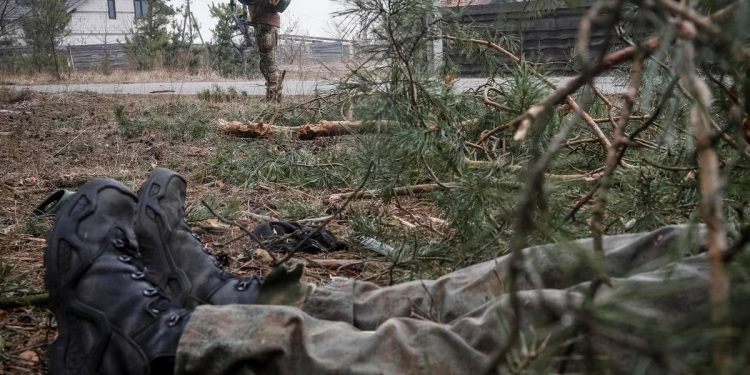 Near Kherson, Ukraine — Russian forces were still shelling areas near Ukraine‘s capital Thursday, two days after Moscow said it would scale back its attack there to facilitate peace talks. Ukraine’s president told his people Wednesday night that the fight to repel Russia’s invasion had reached a “turning point,” and he asked the U.S. for more weapons and other assistance to turn the tide.

In a late-night video address, President Volodymyr Zelenskyy cast doubt on Russia’s stated decision to “drastically reduce” attacks around Kyiv and the northeast city of Chernihiv. He said Russian forces were building up in his country’s eastern Donbas regions in preparation for a major offensive there. Russia has made it clear that it will shift the focus of its “special military operation” to Donbas.

U.S. officials believe units that Russia is pulling back from Kyiv will be refitted for use elsewhere in Ukraine, but given the damage sustained by Russian forces during the first month of Putin’s war, making the equipment battle-ready again could take weeks.

A British intelligence chief said Thursday that Russian forces were suffering from shortages of both “weapons and morale,” leading some to sabotage their own equipment and refuse to follow orders. He said the seemingly poorly trained and equipped troops had even accidentally shot down their own aircraft.

The assessment by Sir Jeremy Fleming, head of Britain’s GCHQ intelligence agency, that Putin had “massively misjudged the situation” in Ukraine, came a day after U.S. officials said intelligence showed Putin had been misled by his own military commanders about the difficulties Russia was encountering.

Ukrainian forces have held Vladimir Putin’s ground forces to a stalemate. As CBS News senior foreign correspondent Holly Williams reported from near the Russian-occupied city of Kherson, next to a burned-out Russian military vehicle, there’s evidence even in Ukraine’s artillery-battered south of Putin’s stalled invasion.

Williams and her team traveled Wednesday with a convoy of Ukrainian soldiers — volunteers from all walks of life — as they headed to reinforce the front line near Kherson.

Andriy Rogalski was a crane operator until he signed up earlier this month. He had just two weeks of basic training and told CBS News that he was frightened he could be killed, but that he and the others heading into battle had quashed their fears, because they know what they’re fighting for.

“It’s pure evil what they did,” he said of Russia’s relentless artillery and missile strikes. The attacks have hit hospitals, apartment buildings, schools and civilians just walking down the road. The U.S. says it’s seen clear evidence that Putin’s forces are committing war crimes.

The United Nations has said thousands of civilians may have been killed in the besieged port city of Mariupol alone. There was hope that more of the estimated 160,000 civilians trapped in that city would be evacuated on Thursday, with Russia agreeing to allow a humanitarian corridor and Ukraine sending about 40 buses in to take people out. But previous corridors have collapsed, with both sides blaming the other for violating ceasefires.

Russia is taking heavy losses in the face of a much tougher Ukrainian resistance than many expected. A NATO official estimated that between 7,0000 and 15,000 Russian troops have been killed in just over a month, but Moscow dismisses the tally as an attempt to demoralize Russian forces. Russian officials say the country has lost fewer than 1,400 troops in Ukraine.

Crane-operator-turned soldier Andriy Rogalski said he believed Putin’s war was a tragedy for both Ukrainians and Russians, and that the Russian president was behaving more like a mafia boss than a world leader.

Second Lieutenant Tatiana Chornovol has front-line experience of Russia’s military capabilities. A former politician and a mother of two, Chonovol is now tasked with taking out Russian tanks.

“The Russians are fighting stupidly,” she told CBS News. “They don’t have a strategy or tactics, they’re falling into the same traps, and their commanders are just pushing them to advance.”

More than 4 million people have fled from Ukraine since Russia launched its invasion on February 24, according to the United Nations. U.N. human rights chief Michelle Bachelet says 1,189 civilian deaths have been confirmed, including 98 children, but her agency says the true toll is much higher.