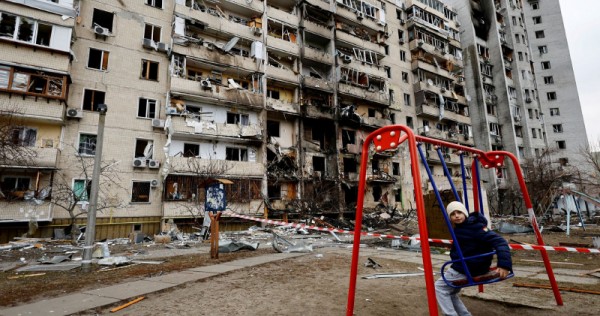 In Southeast Asia, where the Russian Foreign Minister Sergei Lavrov once lamented economic ties ran only “skin deep”, the immediate diplomatic response to Moscow’s Ukraine war has been one of deep ambivalence.

Diplomatic observers say despite Russia’s shallow trade and investment exposure in the region, governments are exercising caution in condemning the aggression as they mull the long-term costs of their response.

Also in focus are surging energy prices and the implications of alienating Russia — the world’s second biggest exporter of crude oil.

“In general there is a lack of urgency and strategic empathy among countries like Indonesia that the war will have ramifications for US-China competition more broadly, and regional flash points like Taiwan, more specifically,” said Evan Laksmana, a senior research fellow at the National University of Singapore.

By Friday (Feb 25) evening — more than 36 hours after the assault began — only Singapore and Indonesia had outrightly condemned the invasion as a violation of Ukrainian sovereignty, though the latter’s statement did not name Russia.

The reaction from the rest of Southeast Asia was a mixed bag, with Malaysia expressing “sadness” over the assault and Communist-ruled Vietnam — Russia’s closest regional partner — calling for a diplomatic resolution to the crisis before the onset of the invasion.

The Philippines and Thailand statements focused on repatriating their respective nationals.

The Philippine Foreign Secretary Teodoro Locsin Jnr on Friday tweeted that he would travel to Ukraine’s border with Poland to ensure the safety of Filipinos fleeing the Eastern European country.

The National Unity Government, which is challenging the legitimacy of junta rule, condemned Russia’s actions for undermining the United Nations charter and international law.

The coup-ravaged country’s ties with Moscow were in the spotlight this week, after a UN special rapporteur named the nuclear power along with China and Serbia as countries that were continuing to arm the junta despite the ongoing rights abuses.

While at present it is mainly the reactions of Asia’s major powers — China, India and Japan — that are under the glare of international scrutiny, diplomatic observers said the reactions of Southeast Asia’s small and medium-sized nations were worth parsing too.

Southeast Asian countries, caught in the US-China power tussle and battling Beijing over sovereignty rights in the South China Sea, have long wagged their fingers over the need for major powers to abide by international law without reservation.

“With the clear exception of Singapore, the response from Southeast Asia has been shocking,” said Abuza, a professor at the National War College in the United States.

“Putin’s ‘doctrine of limited sovereignty’ gives him the authority to stage a full-scale invasion against a sovereign state to install a malleable government, based on very flimsy historical claims and assertions of cultural affinity,” Abuza said.

“The unwillingness of every country but Singapore among Asean

Indonesian President Joko Widodo meanwhile put out a tweet of his own, also not referring to Russia. “Stop the war. War brings misery to mankind and puts the whole world at risk,” he wrote.

In Singapore, officials were quick to highlight the invasion as a cautionary tale for the island republic, which gained independence from Malaysia in 1965 and has endured tensions with Indonesia in the past.

Ukraine has featured in Singapore government talking points about foreign policy and defence since 2014, when Putin annexed Ukraine’s Crimea region.

In its statement on Thursday, the Singaporean foreign ministry said it was “gravely concerned” by Russia’s actions and that it “strongly condemns any unprovoked invasion of a sovereign country under any pretext”.

Also offering tough language was the defence minister Ng Eng Hen, who wrote on Facebook that it was “hard to reconcile this aggression after experiencing nearly 80 years of relative peace”.

Chan Chun Sing, an army general-turned-minister seen as a possible successor to Singapore Prime Minister Lee Hsien Loong, said the situation in Ukraine was “a stark reminder to us that we should never ever take our sovereignty and independence for granted”.

Dylan Loh, a Singapore foreign policy scholar, said the republic’s vocal stance — in contrast with its neighbours — was consistent with its past diplomatic conduct as a small state.

“Small powers that are primarily reliant on diplomacy, international laws and norms rather than might for its foreign policy must speak out whenever territorial aggression happens to register how ‘might’ cannot make ‘right’,” said Loh, an assistant professor at the Nanyang Technological University.

The US magazine Foreign Policy this week reported that Washington had received support from Singapore, Japan and Taiwan to implement “restrictive export controls” on Moscow. The Singapore government has not commented on the matter.

But apart from the city state, Storey said he did not envisage other Southeast Asian countries joining the West in imposing economic sanctions on Russia. “Regional states generally eschew economic sanctions unless they are UN-mandated, and in this case that won’t happen as Russia has a veto,” he said.

Loh agreed, saying he believed that if countries were to back the Western sanctions, it was unlikely to “amount to much but the moral and normative signals would be clear and perhaps that is the more important point”.

US President Joe Biden on Thursday said the G7 nations comprising the most developed Western economies and Japan had agreed to “move forward on devastating packages of sanctions and other economic measures to hold Russia to account”.