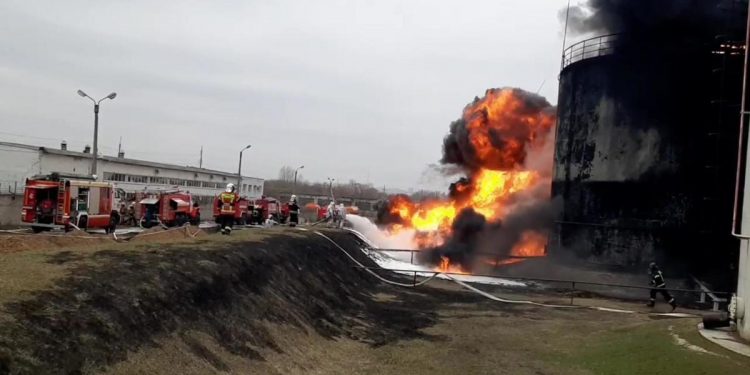 A U.S. official confirmed to CBS News senior national security correspondent David Martin that Ukrainian helicopters did carry out the strike, and anther one a couple days earlier against an ammunition depot in the same area. The official told Martin there was concern in Washington about how Russia might react to the strikes.

Ukrainian officials did not claim responsibility for the attack themselves, but as CBS News senior foreign correspondent Holly Williams reports, it was a significant move by Ukraine‘s forces.

Russian forces have continued attacking Ukrainian cities. They were accused of blocking food and medical supplies from getting into the besieged southern port city of Mariupol on Thursday, and of blocking refugees from getting out despite Moscow agreeing to open a humanitarian corridor.

Russia has pummeled Mariupol and other southern and eastern Ukrainian cities with artillery and airstrikes for more than a month, but attempts to push deeper into the country with ground forces hit a wall, and in some places, they’ve been pushed back.

Just west of Zaporizhzhia, CBS News senior foreign correspondent Holly Williams met some of the Ukrainian forces who stood in their way.

In the farming village of Mala Shesternia, as in most of Ukraine, the Russian soldiers were unwelcome invaders. The residents have fled, but Colonel Serhii Romashko told CBS News his men recaptured Mala Shesternia five days ago, killing some Russians and capturing others.

Their clothes and shoes are still there, even their cooking pots. Romashko said the Russians were used as cannon fodder — sent in with so little food that they looted from the locals.

One of the most notable Russian movements this week was confirmed on Thursday by Ukraine’s national nuclear plant operator, Energoatom, which said the last of the Russian forces that had occupied the decommissioned Chernobyl nuclear plant had pulled out.

Ukraine’s Deputy Prime Minister Iryna Vereshchuk said Russian troops who dug trenches in the still-contaminated forest around Chernobyl had been exposed to radiation, but there was no immediate confirmation of reports that many were sickened.

The global nuclear watchdog agency, the IAEA, said Thursday that it was still assessing the situation at Chernobyl but it had “not been able to confirm reports of Russian forces receiving high doses of radiation” in the exclusion zone around the plant.

The Russian troops from Chernobyl were reportedly headed toward Ukraine’s border with Belarus. U.S. and British officials said this week that, while the Putin regime said it would “drastically reduce” military operations around Kyiv and the northeast city of Chernihiv to facilitate ongoing peace talks, Russia was really expected to regroup its battered forces in Belarus and other places under its control to stage a new offensive in eastern Ukraine’s Donbas regions.

As Williams reported, the Russians have war machines Ukraine can only dream of, but Ukraine’s forces are destroying them, including two armored personnel carriers she saw on a single stretch of road near Mala Shesternia.

Colonel Romashko told her three Russians miraculously escaped from one of the destroyed vehicles, and they’re now being treated in a Ukrainian hospital.

“We’ll defeat them,” he said. “I feel victorious.”

Ukraine’s resistance has also driven back the Russians from the town of Irpin, just north of Ukraine’s capital Kyiv. But the cost is clear to see, with a row of body bags lined up along a city street this week — people slaughtered in what Vladimir Putin calls his “special military operation.”

In Mala Shesternia, the Russians also left behind deadly weapons, including a field carpeted with anti-tank mines. An undetonated rocket propelled grenade sat in the front yard of a home.

Putin sent his soldiers in to capture a country that wants only to be free — and his war is killing both Ukrainians and Russians.

This article was first published in CBS News. All contents and images are copyright to their respective owners and sources.