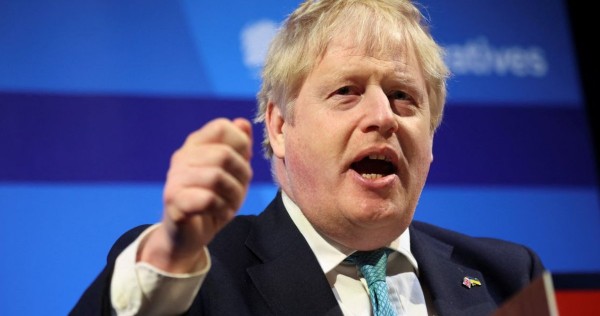 With Ukraine’s ambassador to Britain present, Johnson told a Conservative Party conference it was the instinct of British people, like Ukrainians, to choose freedom every time.

“I can give you a couple of famous recent examples. When the British people voted for Brexit, in such large, large numbers, I don’t believe it was because they were remotely hostile to foreigners. It’s because they wanted to be free to do things differently and for this country to be able to run itself,” Johnson said.

Britons voted in June 2016 by a 52 per cent to 48 per cent margin to leave the European Union, which Ukraine made a formal request to join on Feb 28, four days after Russia sent its troops into the country.

On Friday, the Office of the UN High Commissioner for Human Rights estimated that 816 Ukrainian civilians, including 36 children, had been killed since the invasion began.

“This is an utterly depraved argument,” opposition Labour lawmaker Chris Bryant said of Johnson’s speech. “Ukraine wants to join the EU. The people of (EU member states) France and Spain are also free.”

Johnson said Britain stood with Ukraine and that Russian President Vladimir Putin was “terrified” that a democratic and free Ukraine would undermine his rule over Russia.

“To try to re-normalise relations with Putin after this, as we did in 2014, would be to make exactly the same mistake again,” Johnson said.

Moscow refers to its actions in Ukraine as a “special operation” to weaken its southern neighbour’s military capabilities and root out people it calls dangerous nationalists.

Ukrainian forces have mounted stiff resistance and Western countries have imposed sweeping sanctions on Russia in an effort to force it to withdraw its forces.

For US to regain respect in Southeast Asia, it must learn to listen to Asean