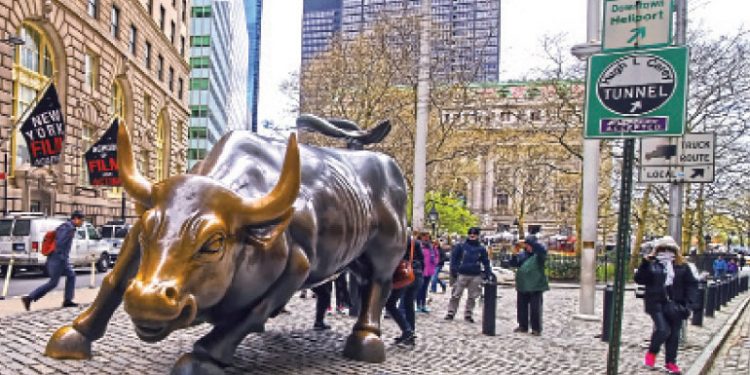 NEW YORK, (Xinhua)  – Wall Street’s major averages climbed modestly in the week as investors focused on news about U.S. President Donald Trump’s positive test for COVID-19 as well as updates of a fresh round of U.S. fiscal stimulus.

The S&P U.S. Listed China 50 index, which is designed to track the performance of the 50 largest Chinese companies listed on U.S. exchanges by total market cap, logged a weekly rise of 1.9 percent.

Market fluctuations remained high on Wall Street this week, and in particular, on Friday, as U.S. stocks finished lower in volatile trading amid concerns over Trump’s health issue.

Trump said early Friday morning that he and his wife Melania had tested positive for COVID-19, after a close aide contracted the virus.

The news came as the pandemic continued to wreak havoc across the country.

The president’s positive test fueled market concerns as the news added to uncertainty going into the election, experts noted.

“Markets are likely to focus on the effect of the news on the election outcome and public health policy,” analysts at UBS said in a note on October 2.

Investors were also worried that the diagnosis would overshadow negotiations in U.S. Congress for another round of fiscal stimulus to combat the economic fallout of the pandemic.

The Democrats-controlled House of Representatives last Thursday night passed a $2.2trillion- COVID-19 relief bill, despite that Democrats and the Trump administration remain far apart on an agreement.

It is not clear whether the two parties could bridge their differences and reach an agreement on the relief package before the presidential election on Nov. 3.

Looking ahead, experts noted that market volatility is likely to remain high as election uncertainty and concerns about the outlook for the U.S. economic recovery would continue to rattle investors.

“2020 is no stranger to volatility and the fears and unknowns that come with it. The upcoming election only adds one more unknown to the pile,” Mitch Zacks, CEO at Zacks Investment Management, said in a note on Saturday.

On the data front, U.S. employers added 661,000 jobs in September, pushing the unemployment rate down by 0.5 percentage point to 7.9 percent, the Bureau of Labor Statistics reported last Friday. Economists surveyed by Dow Jones expected a jobs gain of 800,000.

This compared to an upwardly revised 1.49 million jobs gains in August, when unemployment rate fell by 1.8 percentage points to 8.4 percent, indicating a slowing recovery in the labor market ravaged by the COVID-19 pandemic.

U.S. initial jobless claims, a rough way to measure layoffs, stood at 837,000 in the week ending Sept. 26, following an upwardly revised 873,000 in the prior week, the Department of Labor reported on Thursday.

The U.S. economy contracted at an annual rate of 31.4 percent in the second quarter amid mounting COVID-19 fallout, 0.3 percentage point higher than the previous estimate in late August, the U.S. Commerce Department said in its third and final estimate released Wednesday.