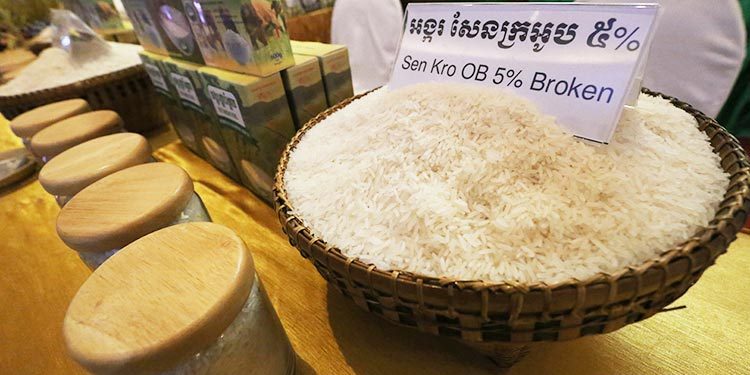 The long and slim kernels SKO rice stands for Sen Kro Oub and DSMK stands for Damneob Sbai Monkul. These varieties have been developed and researched by the Cambodia Rice Federation in collaboration with the Ministry of Agriculture and partner organisations

The long and slim kernels SKO Cambodia rice stands for Sen Kro Oub and DSMK stands for Damneob Sbai Monkul. These varieties are also expected to improve the income of Cambodian farmers.

They have been developed and researched by the Cambodia Rice Federation in collaboration with the Ministry of Agriculture, Forestry, and Fisheries, agricultural cooperatives and partner organisations.

The Sen Kro Oub Cambodia rice varieties play an important role in exports and they are non-seasonal, which allows farmers to grow up to three times a year, according to CRF.

Speaking at the launch ceremony, Minister of Commerce Pan Sorasak said the two varieties are good for Cambodia to show the development of the rice sector in the country and prepare for competition in the international market.

“These SKO Cambodia rice varieties are a new choice for farmers and exporters to compete with other countries’ fragrant rice in the international market,” Sorasak said.

Establishment of collective marks is very important for building customer trust and building clarity for farmers, as some farmers now face difficulties in selling their rice during harvest seasons as farmers do not have a clear source of information on market demand and exporters do not have specific information from farmers, said CRF’s Board Chairman Hun Lak said.

“Establishing the rice brand will give us a medium and long-term result that requires us to work harder and reduce the information gap of market demand and production between exporters, millers and farmers,” he said.

Cambodia has shipped some 310,000 tonnes of milled Cambodia rice to international markets as of June this year, a 21.73 percent year-on-year increase, earning $191 million, according to CRF.

It said that paddy Cambodia rice export was 1.69 million tonnes in the January-May period, earning some $391 million, up 4.5 percent compared to the same period last year.

The launch of the two new collective marks comes as the world faced a crisis of food security caused by the Russia-Ukraine conflict.