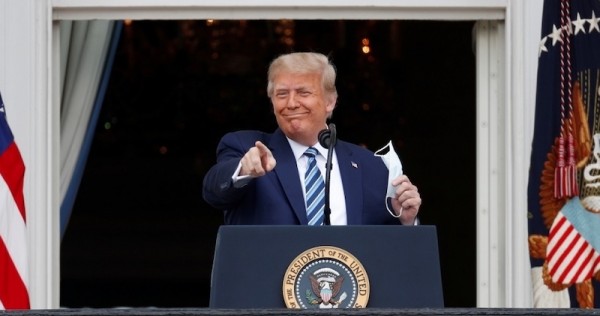 US President Donald Trump appeared back to his old self on Saturday as he addressed supporters at the White House in his first public event since being diagnosed with COVID-19 and his doctor said he was no longer a transmission risk.

Trump took a test on Saturday which showed he was no longer a “transmission risk to others,” his physician Sean Conley said in a statement released seven hours after the White House event. The tests showed there was no longer evidence “of actively replicating virus,” he added.

The White House had no immediate comment on whether Conley’s statement meant Trump had actually tested negative for the coronavirus, which has infected nearly 7.7 million people in the United States and killed over 213,000.

Trump and his administration have faced criticism for their handling of the pandemic, as well as for a lax approach to mask-wearing and social distancing in the White House. At least 11 of his close aides have tested positive for the virus.

Standing alone and not wearing a mask, Trump spoke from a White House balcony on Saturday afternoon – his first public event since being diagnosed with the highly contagious disease. He was hospitalized on Oct. 2 for treatment of Covid-19 and returned to the White House on Monday.

The Republican president, who is trailing Democratic challenger Joe Biden in national polls, urged a crowd of hundreds of largely Black and Latino supporters, most wearing masks but not following social distancing guidelines, to help get out the vote in the Nov. 3 presidential election.

Eager to get back on the campaign trail after an absence of more than a week, Trump plans to travel to the key battleground state of Florida on Monday, followed by rallies in Pennsylvania and Iowa on Tuesday and Wednesday, respectively.

Speaking firmly and with no sign of the raspy throat evident in recent interviews, Trump delivered a shorter-than-usual campaign speech.

He attacked Democrats as pursuing a “socialist” or even “Communist” agenda, and hailed his own record in fighting crime and boosting the U.S. economy, while flag-waving supporters cheered and chanted, “We love you.”

A flesh-coloured bandage was visible on his right hand.

While Trump’s doctor had cleared him to resume public engagements from Saturday, other medical experts said the timeline appeared to be rushed.

Dr Sandy Nelson, an infectious diseases specialist at Massachusetts General Hospital, said public health guidelines allowed those with mild cases of COVID-19 to resume contacts 10 days after the onset of symptoms and after 24 hours with no fever, without the use of fever-reducing medications.

But for people who were hospitalized and required oxygen, such as Trump, the guidelines generally called for isolation of longer than 10 days and up to 20 days, she said.

“It’s fair to say that he’s meeting the time-based criteria, but those criteria are not designed for people who are hospitalized,” she told Reuters.

In his statement on Saturday, Conley said the president’s tests revealed decreasing viral loads and “decreasing and now undetectable subgenomic mRNA.” He provided no further details.

Nelson, who is also a professor at Harvard Medical School, said the reference to mRNA was puzzling since the test was not used outside of research applications.

It was the first time Trump had appeared in public since his release from the hospital on Monday when some observers said he appeared at times to be short of breath.

The White House has released videos and Trump has called into television shows since then, but this was supporters’ first chance to see the president live.

The White House has not disclosed when Trump last tested negative for COVID-19. He first revealed that he had tested positive on Oct. 2.

Given the timeline, Nelson said it was possible that Trump was contagious on Sept. 27 during the first presidential debate with Biden. Biden, who has tested negative for the virus repeatedly, and again on Saturday, was probably safe, but would not be completely clear of the risk for two more days, she said.

The Biden campaign had no immediate comment on Trump’s condition.

Opinion polls increasingly show that as Election Day approaches, voters see Nov. 3 as a chance to cast a vote on Trump’s handling of the coronavirus pandemic.

Trump repeated past calls for states to reopen their economies even as new cases of COVID-19 hit a two-month high on Friday. A Reuters analysis showed more than 58,000 infections were reported and hospitalizations in the Midwest hit a record for a fifth successive day.

Democrats and some commentators criticized Saturday’s event for potentially exposing a new batch of supporters to the virus and for using a federal building as an election prop.

Asked about the Trump event in New Castle, Delaware, Biden said he hoped the president and his supporters were taking precautions.

“They should be socially distant and wearing masks,” he said. “It’s the only responsible thing to do.”

Republican Tom McCullagh, who is running for a state senate seat in Illinois and flew to Washington for Trump’s event, said he was not worried about catching the virus.

“If the president felt it was safe enough for him to hold a rally, I trust his judgment,” McCullagh told Reuters.

McCullagh wore a mask and kept his distance from other participants but said he did not have his temperature taken before entering the White House grounds. Sources familiar with planning for the event had said participants would be screened for possible COVID-19 symptoms and have their temperature taken.