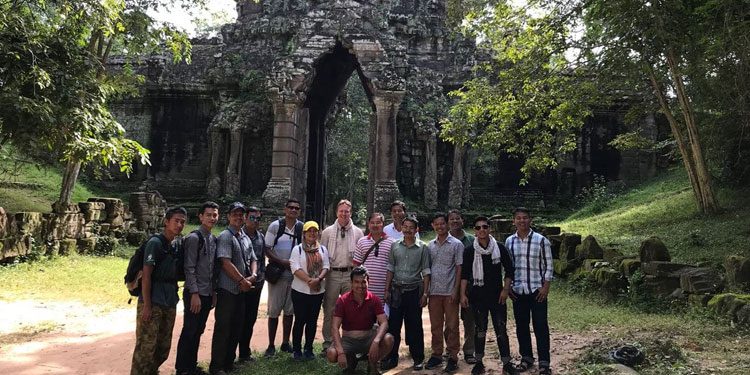 With the three-day Pchum Ben holiday starting tomorrow many Cambodians are heading to tourist destinations around the country. Searches on booking aggregator Trivago show that a lot of hotels in popular destinations are already full. So what happens when the country reopens to foreign tourists? Will there be enough hotels and tour operators to cope and what can foreigners expect from the “new normal”?

Nick Ray wrote the book when it comes to Cambodian tourism. He’s the author of the Lonely Planet guidebooks for the country, along with those for Laos, Myanmar and Vietnam. He’s also a tour leader, tourism lecturer and sustainable tourism consultant for nongovernmental organisations and the World Bank. He spoke with Khmer Times reporter Michael Firn about the state of the tourist industry in Cambodia and the outlook once the country has reopened.

KT: There’s talk of Cambodia opening up to foreign tourists as early as November. Given that it’s been a lean two years for the industry and many companies have gone under how well prepared do you think the Kingdom is for the return of international visitors?

NR: It has been an awful 18 months. Siem Reap International Airport hasn’t seen an international flight since March 26, 2020. A lot of jobs have been lost in hospitality, hotels, restaurants, tour operators, so it has been a real struggle. However, I do think that people are ready. Cambodians have a wonderful, warm spirit and are very welcoming hosts so, despite the fact that they are out of practise with international tourists, that sort of skill set and that personality doesn’t disappear overnight.

The airports have been ready all the time. It’s not that the airports aren’t operating, its just that there aren’t enough flights coming in because of restrictions.

It’s the same with tour operators and DMCs [destination management companies]. They’ve been in hibernation for a long time. They’ve downsized and downscaled. They’ve mainly sadly been dealing with delays, cancellations and postponements but the attractions and the draw that Cambodia has remain the same. The temples of Angkor are timeless and they’re empty. They’re ready to welcome visitors. It’s a very socially distanced, safe destination.

There are new ecotourism destinations opening up in the Cardamoms, in Mondulkiri and Ratanakiri. There are places like Phnom Penh, a great host city in terms of restaurants et cetera.

Cambodia has taken some big hits, particularly as it’s so reliant on tourism compared with some of its neighbours, but I do think it can recover quickly. All we need is the green light from the government. We need a clear message. With people in the industry that I’ve spoken to in all sorts of associations and businesses the message is: We need a date. Tour operators and travel agents plan three to six months ahead, nine months, twelve months even, so people in Europe, the UK and  North America are looking at where to go in January, in March, November next year. They’re going to choose destinations that are open without quarantine. When they do the “compare and contrast” they say: We’d like to go away this Christmas. What should we choose? Costa Rica’s open, Turkey’s open, Egypt’s open. If you see a destination that’s closed, you’re much less likely to book it. The key message here is that holidays and quarantine are incompatible.

KT: Some industry experts have said that the non-chain hotels and budget tour groups that went out of business in the past two years will come back along with the tourists. How easy is that given many have moved into other industries and may be reluctant to return?

NR: Firms with parent companies overseas, branches of travel companies or international hotel chains, have got a support network in place. They have capital supporting them from overseas. It is a lot harder with small, independent businesses, family-run guesthouses, backpacker hostels, small restaurants, pop-up bars.

In places like Siem Reap, Kampot and Sihanoukville there have been a lot of foreign businesses and it can be even harder for them because there’s no furlough, no support, unlike in other countries where you can rely on state support. If your business has a rental issue that’s a big overhead. If you’re a local business and you own your own property it may be that you can sustain things for longer because you don’t have that big rental hit every month.

Those that have survived this long can see light at the end of the tunnel. They’ve done a fantastic job if they have managed to get this far, particularly in somewhere like Siem Reap that’s had it harder than most but also is not just an easy weekend escape. Places like Kampot and Kep have drawn a lot of domestic tourism, a lot of weekenders. Siem Reap is just a little bit far to go for a Friday or Saturday night and that means usually people go for religious holidays, Khmer New Year and Pchum Ben. Khmer New Year needed to be cancelled because of the heavy lockdown in April and Pchum Ben was almost cancelled and is certainly being underplayed and Siem Reap has just reopened. So they’re missing their big ticket items each year on the domestic side.

There will be a thinning out of businesses in Siem Reap. It’s hard to get statistics from people but we understand that something in the region of 75 to 80 percent of accommodation providers are closed. How many are permanent we don’t know. Some have converted to be apartments, some have opened other businesses. Thousands of tour guides have been unemployed for 18 months and some have gone into farming, some into construction, some into car sales or real estate. They’re among the best in the world and they’ll need to get back on their game as quickly as possible.

We don’t think it’s going to be like a light switch even if we announced a full removal of quarantine on November 1. we’re not going to see a huge influx on the scale it was before. It’s going to be steady and slow growth so we might see just a few thousand in the first few months and it will really take into 2022 to steadily build up confidence.

KT: What sort of experience can tourists expect in the “new normal’”? What has changed and how will that affect their stay?

NR: This is part of the announcement we’re waiting for. Based on my own experiences living here and being a domestic tourist in recent months there’s going to be a lot of use of the Stop Covid app. That’s been quite successful in terms of people getting into the habit of scanning in and out of restaurants and hotels. The three dos and don’ts from the WHO [World Health Organization] are endorsed by the Cambodian government. People are used to the idea of wearing masks, sanitising, temperature checks.

The one good thing about Cambodia in terms of the new normal is our vaccination rate. It’s an exceptional story. We’re now in the top 20 most-vaccinated countries in the world in very unlikely company with all these highly-developed, wealthy countries. That means that visitors can arrive in Cambodia safe in the knowledge that pretty much everybody they come into contact with has been vaccinated.

KT: How easy will it be for budget tourists even to get here given a likely seven-day quarantine, PCR tests, health insurance and a lack of budget airlines operating routes to Cambodia?

NR: Even if we reduce the quarantine to seven days there may still be $1,000 involved so it is quite prohibitive. We should never discourage backpackers. There have been studies in Australia and Thailand. Overall their spend is often higher than mid-range and high-end tourists because they stay longer and the spread of that money is much further. They go to stay in communities, homestays, do activities, they’re out and about in local restaurants, at market stalls. A backpacker that stays for a month in Cambodia might still spend $2-3,000 whereas a four-and-a-half day stay even in a quite upscale hotel, they might spend less than $1,000.

As long as Southeast-Asia maintains heavy restrictions and is risk-averse it’s going to be a difficult proposition for backpackers because they’re used to bouncing around from Thailand to Cambodia to Vietnam to Laos. That’s off the table because even if Cambodia opens, Vietnam might not open until 2022 because of their slower vaccination rate.

Overland backpacking is going to be very difficult in the short term. On the other hand, Cambodia is in that unique position through vaccination rates and readiness, that they could open in November. Hence the industry is arguing no quarantine, maybe 36-48 hours awaiting the result of the first PCR test. With backpackers in mind that would bring down the cost.