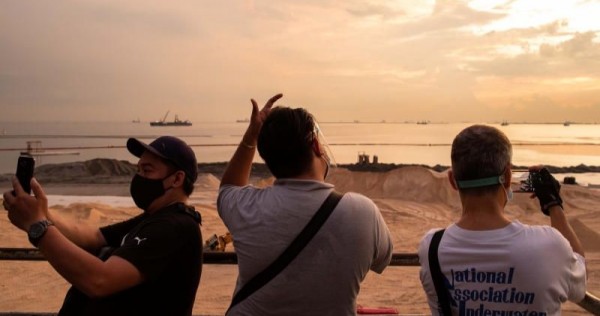 In the Philippines, government officials have assured the public that Manila’s controversial new fake beach isn’t toxic, won’t wash away and will instead promote tourism, business and public spirit – but any positive impact will have to wait until the end of the Covid-19 pandemic, after so many people flocked to the beach in violation of social-distancing measures that it was shut down just two days after it was opened.

Critics also say it was constructed without any assessment of its effect on the environment , while concerns have been raised over the possible health effects of the artificial sand and the millions of pesos spent on the project while the Philippines is still battling Covid-19.

What is now called “Manila Bay Sands” sprang into existence in a matter of days: on Aug 31, dump trucks started depositing what eventually amounted to at least 3,500 tonnes of fine white sand, made from pulverised dolomite, on a 500 metre stretch of reclaimed land along the bay.

The synthetic strip, a project of the public works and environment departments, has been variously described by officials as “beach enhancement”, “beach nourishment” and “beautification”. Manila Bay is famous for its glorious sunset views, but its waters are heavily polluted and swimming in them is dangerous to health.

Environment undersecretary Benny Antiporda on Sept 4 said the project was a way of bringing Boracay – the central Philippine island famous for its beaches with sugar-like white sand – to the poor of Manila. He also claimed the new beach would discourage people from littering.

On Sept 19, after workers had flattened and packed the sand, officials allowed a curious public access to the beach. Thousands showed up to take selfies, and two days later President Rodrigo Duterte praised the project, saying “people now are really enjoying the reclaimed area with the white sand”.

But the beach was shut down on Monday after the authorities realised the crowds were not observing proper social distancing, and the police officer charged with controlling visitors was relieved of his position.

Manila mayor Francisco Moreno told the public they should be content just to view pictures of the beach online, while in subsequent days police have even banned visitors from taking pictures.

Department of environment and natural resources undersecretary Benny Antiporda on Tuesday said the beach could be reopened to the public once the pandemic was over, while Moreno a day later remained bullish about the project, saying that all the hotels on Roxas Boulevard – the popular waterfront avenue running along Manila Bay – would benefit from it.

But other concerns have also been raised. Terry Ridon, convenor of the NGO Infrawatch, a public policy think tank focusing on major public infrastructure projects, said the beach – built using dolomite obtained by pulverising the hillside of Alcoy town in Cebu province – did not have an environmental compliance certificate. He also claimed there was only one bidder for the project, with no negotiation on its cost.

On top of this, opposition party Akbayan on Thursday filed a motion to the Supreme Court questioning why the government was spending 389 million pesos (S$11 million) to beautify the bay when the Philippines was still battling Covid-19.

The environment department said the project actually cost 28 million pesos, but in recent months Duterte has repeatedly stressed how cash-strapped the government was when it came to dealing with the pandemic.

Akbyan’s filing also cited the beach as a “health hazard” and claimed it could have ill effects on residents as well as the environment as it was “unnatural and synthetic”, a topic being fervently debated online by Filipinos.

On its website, the environment department says dolomite is not harmful to the environment or to humans, and that it is widely used in aquariums as a neutraliser that lessens the acidity of seawater. It added that the sand “does not pose a hazard to human health because it is not inhalable”.

However, health undersecretary Maria Rosario Vergeire had on Sept 7 told reporters that dolomite dust could cause “respiratory issues” and affect the eyes as well as the gastrointestinal system.

Mining the dolomite may also have caused environmental damage near the town of Alcoy, with media in Cebu reporting that crushed dolomite had fallen into the sea while being loaded onto ships, causing heavy siltation that damaged and destroyed corals.

Cebu earlier this month banned the extraction of dolomite, with provincial officials saying they were not consulted and did not provide a permit for the mining activities that led to the sand used in the Manila beach. On Friday, environment secretary Roy Cimatu ordered the suspension of the two mining companies involved, pending an investigation.

In the Philippine capital, officials have been busy shoring up the beach with sandbags as storms and waves threaten to wash it away. During the rainy season, tonnes of rubbish have been washed up along Manila Bay, while the new beach looked smaller after one particularly heavy storm this week.