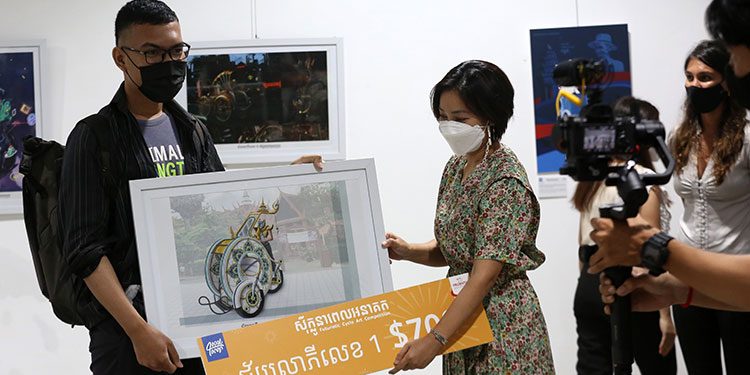 Three artists have won awards for their work in reimagining the cyclo. Sin Vannak took the top prize in the Futuristic Cyclo Art Competition, Judisak Meng won the first runner-up and Toby West got the second runner-up medal for their drawings of the pedal-powered precursor of the tuktuk. They also won cash prizes of $700, $500 and $300 respectively.

The competition was jointly organised by Local4Local and Prudential Cambodia in an attempt to rescue the iconic bicycle rickshaw, which is disappearing from the streets of Phnom Penh and other Cambodian cities.

Local4Local is a youth-run food charity that creates jobs for cyclo drivers by getting them to deliver warm meals to Phnom Penh’s homeless in exchange for food coupons. The drivers also took Covid-relief packages to people locked down in red zones at the height of the Covid-19 pandemic. The drivers collect the food parcels from 10 Cyclo Pantries dotted around central Phnom Penh.

The art event was part of the group’s efforts to raise awareness of the cyclo and call on young entrepreneurs, artists and designers to help modernise its design. Local4Local wants to create a futuristic prototype for less than the price of tuktuk and make the cyclo a common sight on the streets again.

The competition received 60 entries and the judges shortlisted 33 of them, which will be on display at the FT Gallery at Factory Phnom Penh until  December 2. The paintings will also be available digitally.

Entrants had to be younger than 30 and could be any nationality, so long as they had lived in Cambodia over the past six months.

Local4Local was set up in April this year. It is the brainchild of Taing Huang Hao, a student and street photographer who was stranded in Cambodia during the Coronavirus pandemic.

“We the organisers believe that creativity and art can drive change and innovation,” said Hao. “Through this contest and the entries we received, we have been able to visualise what a modern cyclo could look like. We now look forward to bringing in more collaborators to build out a prototype for the new cyclo. With a little hope, creativity and kindness we believe we can rescue a national icon together.”

Sanjay Chakrabarty, the Chief Executive Officer of Prudential (Cambodia) Life Assurance Plc said his company has survived for 172 years by changing when necessary to stay relevant to its customers.

“Today the cyclo must do the same,” he said, adding that cyclo drivers are not alone. “They have passionate youth like Hao at Local4Local to guide them. It is important the youth lead this initiative as it is with their support the cyclo will continue to inspire generations. We’re glad we can support this.”

The awards were presented by National Bank of Cambodia’s Assistant Governor and Director General of Central Banking Chea Serey, who is also the Founder of Raksa Koma Foundation, a sponsor and supporter of Local4Local.

“Every participant exhibiting tonight is a winner,” she said. “They are all winners because they get to exhibit their ideas and art. Many do not get a chance. They also win because they represent and are trying to revive Khmer culture and a way of life.”

Cambodia economic growth revised to reach around 3 percent this year