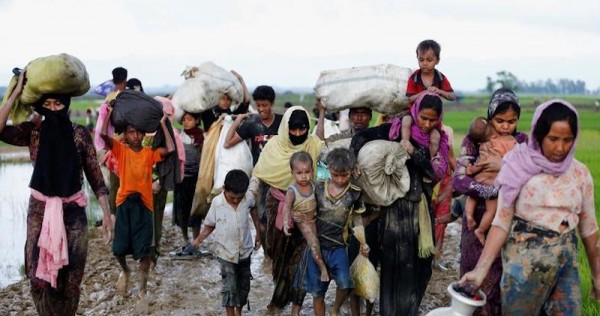 NAYPYITAW, MYANMAR – Thousands of villagers have fled their homes in Myanmar’s Rakhine state after a local administrator warned dozens of village leaders that the army planned “clearance operations” against insurgents, a lawmaker and a humanitarian group said.

But a government spokesman said late on Saturday (June 27) an evacuation order issued by border-affairs officials had been revoked.

Border affairs acknowledged issuing the order through the local administrator but said it affected fewer villages.

The warning to the village leaders came in a letter written on Wednesday, which was seen by Reuters and verified by a state government minister, Colonel Min Than.

The letter, signed by the administrator of Rathedaung township, Aung Myint Thein, told village leaders he had been informed the operations were planned in the township’s Kyauktan village and nearby areas suspected of harbouring insurgents.

The letter does not specify where the order came from, but Min Than, Rakhine state’s border affairs and security minister, told Reuters it was an instruction from his border affairs ministry, one of three Myanmar government ministries controlled by the army.

“Clearance operation will be done by forces in those villages,” the letter from the administrator said.

“While this is being done, if the fighting occurs with AA terrorists, don’t stay at the villages but move out temporarily,” it said, referring to the Arakan Army, the name of the Rakhine state insurgents.

The administrator could not be reached for comment by Reuters.

Min Than said the “clearance operation” described in the letter referred to military operations targeting “terrorists.”

He said the administrator had misinterpreted the order from his ministry and that the operations would only take place in a few villages, not the dozens mentioned, but confirmed other details.

The operations could last up to a week, Min Than said by phone, adding that “those who remain will be those who are loyal to the AA.”

On Saturday, government spokesman Zaw Htay said in a statement on Facebook the government had instructed the military not to use the term “clearance operations”.

He also said the letter ordering people to flee had been revoked.

He did not answer phone calls from Reuters seeking further comment.

Reuters did not see the revocation instructions.

This year the Myanmar army has been fighting the AA, a group from the largely Buddhist Rakhine ethnic group that is seeking greater autonomy for the western region, also known as Arakan.

Dozens have died and tens of thousands been displaced in the conflict. Save the Children says 18 children were killed and 71 injured or maimed between January and March, citing local monitoring groups. The army says it does not target civilians.

“Clearance operations” is the term the Myanmar authorities used in 2017 to describe operations against insurgents from Rakhine’s Muslim-minority Rohingya people. During those operations, hundreds of thousands of people fled from their homes.

Refugees said the army carried out mass killings and arson, accusations the army has denied.

Rohingyas fled to neighbouring Bangladesh during that military crackdown, which the government said was a response to attacks by Rohingya insurgents.

In a joint statement on Saturday, the British, US and Canadian embassies in Myanmar said they were “deeply concerned by the reports of the Myanmar Military’s clearance operations along the Kyauktan village tract” and “the worsening humanitarian and security situation across the region.”

“We are aware of the historic impacts of such operations disproportionately affecting civilians,” the statement said.

It called on “all armed actors to exercise restraint while in areas inhabited by local communities, some of whom may not, by no fault of their own, be able to seek refuge elsewhere.”

In anticipation of the new operation, Min Than said 80 people had fled Kyauktan to elsewhere in Rathedaung township and that the army had prepared shelter and food.

Zaw Zaw Htun, the secretary of the Rakhine Ethnic Congress, a humanitarian group, said at least 1,700 had fled to the neighbouring Ponnagyun township.

Another 1,400 are sheltering in a nearby village and are in dire need of food and other supplies, said regional parliamentarian Oo Than Naing from Rathedaung township.

A military spokesman did not answer phone calls seeking comment about the operations. Reuters could not independently verify how many people had fled their homes.

The British-based rights group Burma Human Rights Network said residents of 39 villages had begun to flee since the order was issued in Kyauktan on Wednesday, citing local sources.

The Kyauktan area is home to tens of thousands of people, from both Rohingya and Rakhine communities, according to the Rakhine Ethnic Congress.

Journalists are barred from most of Rakhine state, and the government has imposed an internet shutdown on most of the region, making information difficult to verify.