The most koala-ful time of the year: Australian family finds marsupial in Christmas tree 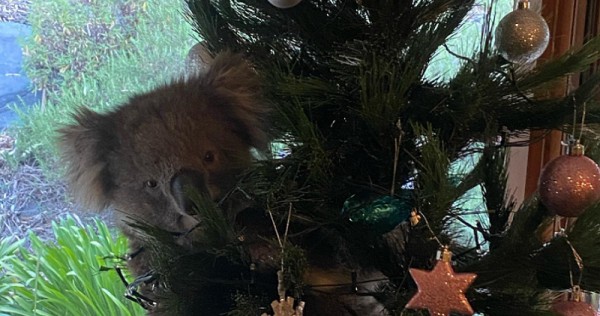 A woman in Adelaide, southern Australia got herself an early Christmas present this year.

Amanda McCormick arrived home on Wednesday (Dec 2) to the sight of an adorable koala hanging on the Christmas tree in her lounge, munching on some (plastic) leaves.

“Hello sweetheart, what are you doing in the tree?” she asked the marsupial as she filmed the unusual scene.

So, how did the marsupial get in?

According to McCormick, she had left the back door open for her dog, and the cheeky koala took the opportunity to sneak into her home.

Amused by the surprise visitor, McCormick posted video clips of the encounter, and her Facebook posts went viral shortly after.

As cute as the koala looked clinging onto the Christmas tree, the woman knew it didn’t belong there and called local koala rescue group 1300Koalaz for help.

Their hotline operator couldn’t believe what she heard at first, thinking that she had received a prank call, 1300Koalaz said in a Facebook post.

“But no, a koala desperate to get in the Christmas spirit had wandered into Amanda McCormick’s house and decided it wanted to be the fairy on the Christmas tree.”

Not something you see every day

Rescue group co-founder Dee Hearne-Hellon told CNN that such incidents happen once in a blue moon.

“The koala was a healthy juvenile female and was released out the front of the house, which is in a really lovely area for koalas if they have to live amongst us,” said Hearne-Hellon. “The koala was still in the same tree she chose to climb when I saw her today (Dec 3).”

While koalas are adorable animals, she reminded the public to leave them alone as “they can get aggressive” since they have “very long claws and very sharp teeth”.

This could be seen in the clip of the rescue. As the rescue team tried to pry the marsupial away from the tree, it let out a deep growl and refused to let go.

“They are a lot cuter than they sound”, McCormick remarked in her video. These critters might seem little but they are definitely lethal.

Koalas are Australia’s little darlings, however, the population has been declining over the years.

Bushfires, diseases, as well as the loss of their natural habitats are just some of the factors contributing to their decreasing populations.

According to a study published in the academic journal PLOS ONE, the number of diseased koalas has been steadily climbing over the last 30 years, while the number of sick koalas that were supposed to be returned to the wild has fallen.

1300Koalaz has been rescuing, rehabilitating and releasing koalas back into the wild since last August in South Australia. Their goal is to ensure that koalas who have lost their homes to bushfires and deforestation are being cared for.

McCormick too, was concerned for the koala’s well-being, and was heard telling the rescue team: “I don’t care if she destroys the tree, as long as she is okay”.

She also appeared to hold a soft spot for the koala, cooing at the marsupial while affectionately naming her Daphne.

McCormick’s most “exciting Wednesday night” gives us a little hope that maybe the end of this difficult year might turn out to be just fine.