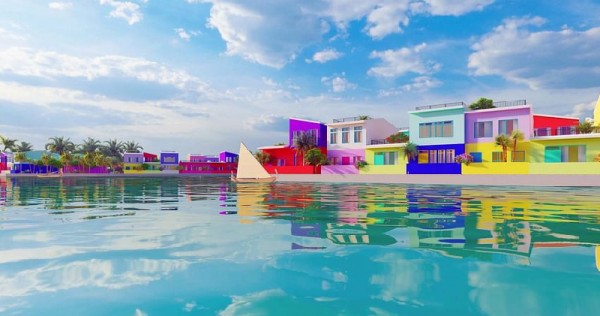 Ocean levels aren’t just rising. They’re rising at more than double the rate they did in the 20th century, which means an average yearly bump of 3.6mm per year.

This is assuming all other factors like carbon emissions and global warming stay put. In other words, it’s bad news for low-lying nations with little land space like The Maldives, where a vast majority of the land area in the archipelago’s 1,190 islands are less than a metre above sea level.

But radical problems require radical solutions, which is why the nation’s government – along with property developer Dutch Docklands and architecture studio Waterstudio – have commissioned a brain coral-shaped floating city with room for 20,000 people in a 200-hectare lagoon just a ten-minute boat ride away from the Maldivian capital of Male.

Yes, an actual floating city, straight from the pages of a sci-fi novel (or the brain of another overachieving Danish architect, who proposed Oceanix City in Busan) that’s as future- and climate change-proof as it gets. After all, what’s better to thwart rising sea levels than homes that rise along with it?

A brain coral when viewed from the air

The citizens of the new floating utopia – designed to resemble a brain coral when viewed from the air – will be spread out across some 5,000 houses, shops and restaurants, all connected by a network of canals to amenities like a hospital, school and government building.

The urban development isn’t just for Maldivians – the city’s underside features artificial coral banks too, thereby encouraging natural coral growth along with it.

Both the coral reef and design work hand in hand to keep the floating city, well, afloat – the former acts as an undersea wave breaker, keeping the motion of the ocean to a minimum; while the latter grid of floating structures, connected to the seabed via telescopic steel stilts, bucks and bends to accommodate for what’s left of the waves, thereby keeping the overall structure safe and stable for residents.

And don’t think of this development as a spartan Noah’s Ark-esque endeavour either.

These corals are a pretty sight in their own right, and together with hotels, restaurants and a world-class marina integral to the city, underpin the nation’s desire to thrive as they sidestep the widespread turmoil and devastation that comes with inexorably rising sea levels.

The floating city is designed to be as self-sufficient as possible – generating its own electricity via solar panels, and sewage processed onsite.

To further reduce their footprint, the city will be cooled by water from the depths of the ocean rather than traditional air-conditioning; the entire structure, artificial coral banks included, has also been rigorously assessed to support marine life and keep environmental fallout to a minimum.

Residents can expect to move in as early as 2024, though the city itself will only be completed proper three years later, where it’ll serve a good deal more residents than the comparatively modest Oceanix City under construction in Busan, which would accommodate 12,000.

Chinese warplanes take to skies, US warships on move before expected Nancy Pelosi visit to Taiwan