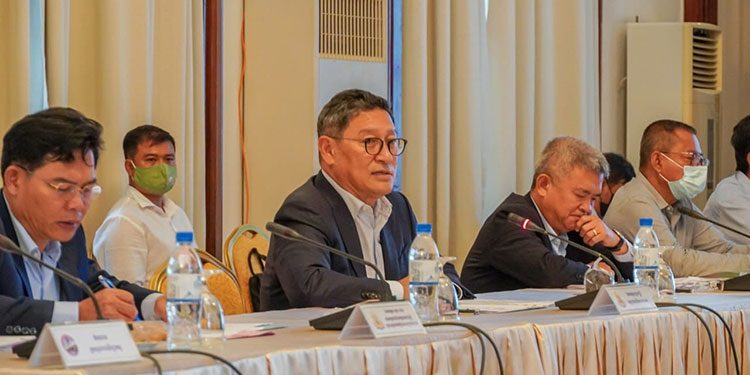 The master plan for the development of Koh Sramoch in Preah Sihanouk province of Cambodia has been revised and submitted by the developer to the Council of the Development of Cambodia (CDC) for review before being forwarded to the government for official approval, an official told Khmer Times.

The review of the revised master plan of the development project has been in the process with an inter-ministerial meeting held at CDC on Friday last week chaired by Sok Chenda Sophea, CDC’s secretary-general, to collect technical inputs from stakeholders before reaching a final decison, the official said.

“It was an inter-ministerial meeting for technical officials to discuss, review and provide opinions. After that, CDC will request for a principle to the government for official approval for implementation of the newly revised master plan accordingly, but by the meeting spirit, it is agreed,” said Long Dimanche, deputy governor of Preah Sihanouk province, who attended the meeting.

The meeting was organised by the Cambodian Investment Board of CDC to seek feedback regarding the proposal for revision of the Koh Sramoch development master plan by Ream Resort and Development Co Ltd after the company had conducted a study for the project to be consistent with the current situation.

“The new master plan also includes technical standards, ecosystem, environment, market status, etc. We have encouraged and praised the company for developing Koh Sramoch following the government awarding the right to invest on the island as it did not suspend operations during the spread of Covid-19 even though others did,” Dimanche said.

However, he did not specify the details of items such as costs of the project that have been changed in the master plan for the development of resorts and hotels on the about 30 hectares of land of the island but said that the newly revised plan consists of a marina pier that was not included in the previous plan.

“The previous plan did not include the marina pier, but now the company requests for putting soil into the sea to build the pier… in addition to the activities they have been currently doing in the previous master plan, but the government has not officially approved the newly revised plan yet,” he said.

Dimanche said that the provincial authorities support the development project because it would support Cambodia’s economy by promoting tourism in Cambodia by building resorts and hotels that can attract more tourists and create jobs for local people. “We have requested that the company recruit staff among local people,” he added.