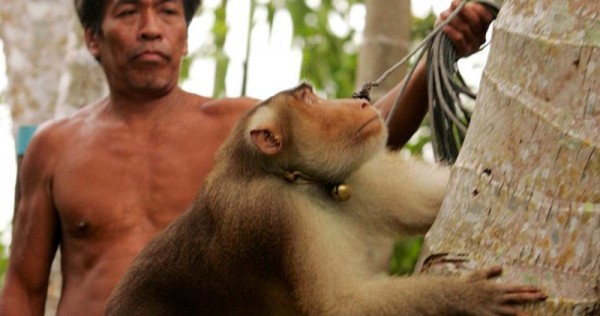 BANGKOK – Monkey labour to harvest coconuts for commercial products “is almost non-existent” in Thailand, the Commerce Minister said on Monday (July 6), after British retailers announced bans on products campaigners say use the animals in their production.

Ms Symonds on Friday backed a call to supermarkets to stop selling Thai coconut products over accusations of monkey “slaves” by the rights group People for Ethical Treatment of Animals (PETA) published in the Telegraph newspaper.

“But there may still be the pictures of monkey collecting coconuts for tourism on video clips, which created a misunderstanding,” Mr Jurin said.

“How do you even find that many monkeys to collect large amounts of coconuts to cater to the industry?” she said.

When asked by e-mail about the minister’s comments that the video may have been taken at tourist shows, rather than in an industrial plantation, PETA Senior Vice-President Jason Baker said: “PETA’s investigation footage was captured recently on plantations and training schools.”

“When the government tries to explain away extreme cruelty to monkeys, it only makes the public angrier,” he added.

Reuters could not verify whether the monkeys in the PETA video were being used in commercial coconut farming.

Thailand last year exported coconut milk worth 12.3 billion baht (S$551.3 million), about 8 per cent of it to Britain.

Walmart-owned supermarket Asda also said it was removing products from Aroy-D and Chaokoh, Thai brands of coconut milk, while investigating the PETA report.

An Aroy-D spokeswoman disputed the report and said British retailers did not consult it before their announcements.

Chaokoh did not reply to queries on Monday.

Mr Edwin Wiek, of the Wildlife Friends Foundation Thailand that tends to rescued wildlife, said he believed the practice was waning as farmers strived to meet European trade standards.

“I do believe that monkeys are still being used for the coconut picking. But in the last 15 years, it’s going down at a very big rate,” he said.