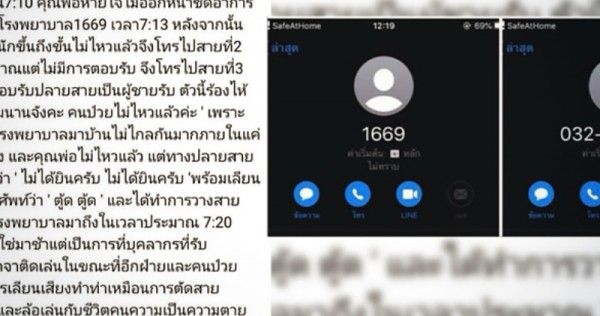 In a Facebook post on Sunday (July 19), an 18-year-old said that when she called the medical hotline 1669, the official who answered the phone mimicked the sound of a busy signal and cut the call.

In order to clarify her post, reporters visited her in Ratchaburi province on Monday. She was at the funeral of her father, 53, who died on Sunday.

The Facebook user, who wanted to be identified only as Pronrawin, said she called the hotline three times on Sunday. In the first call, she told the officer that her father was choking, and the officer acknowledged the situation and took down her address.

As her father’s condition worsened, Pronrawin decided to call again. The second call had no signal, but the third call was answered by a male officer. First the man said he could not hear her, then he mimicked a busy signal before hanging up on her.

Pronrawin said she placed her first call at 7.13am and the ambulance arrived at 7.20am. Her father had started choking at around 7.10am.

Pronrawin said she was very angry over the third call, saying her father’s life was precious and the officer should not have turned a life and death situation into a joke.

The reporters then contacted the related hospital and the director promised that he will find the man in question. He also told the reporters that he had spoke to the victim’s relatives and will speak to them again after the funeral proceedings are completed.

Trump shifts rhetoric, warns virus is getting worse and urges wearing of masks