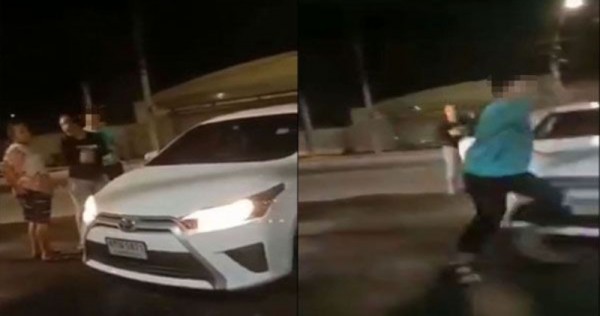 A teenage boy, infuriated by a fellow game player’s refusal to meet and accept insults about his mother, decided to drive to his opponent’s house and have it out face to face.

A video clip of the row was posted on Facebook on Tuesday. The clip shows the teenager arriving in a white car with his mother, who can be seen starting a row with the other boy’s mother.

The battle between the two families is reportedly over with nobody sustaining injuries.

The incident had taken place on Monday, when the two boys, both 15, were playing a game online and the teenager decided to call his opponent’s mother a prostitute.

More fuel was added to the fire when the teenager’s mother supported the insults her son was flinging at his opponent.

The teenage boy’s grandmother told reporters that her grandson was mentally ill and had not been taking his medication. Apologising for her grandson’s bad behaviour, she said he had moved out and was now living with his mother.

The reporters then visited the house the mother and son are said to be living in, but found nobody there, though the white car in the video clip was parked outside.

Her son also said their attacker used vulgar language while playing and had challenged him for face-to-face meeting, which he refused because he does not have a car.

However, the other boy did not give up and showed up at his opponent’s house with his mother, ready to fight and possibly run his “enemy” over.

Though the teenager’s mother stopped him from running over his opponent, the battle did not end there. The teenager then decided to jump out of the car and physically assault his opponent, who was saved by bystanders and friends.

“He tried to further beat me up, but my friends helped protect me. He later decided to stop and leave,” he said, adding that the other boy later apologised to him online.