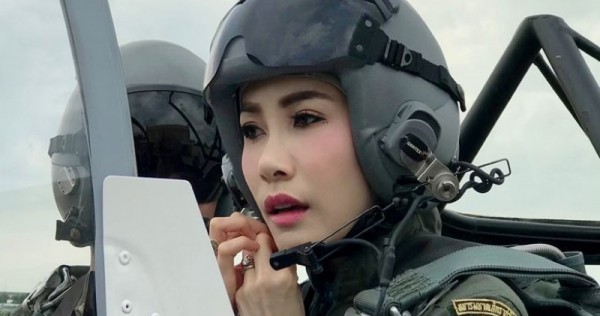 Thailand ’s King Maha Vajiralongkorn on Wednesday announced that his royal consort Sineenat Wongvajirapakdi has been reinstated after she was spectacularly removed from the position last year .

Former royal bodyguard Sineenat – known by her nickname “Koi” – was initially given the title of royal consort on the king’s 67th birthday in July 2019, the first time in nearly a century a Thai monarch had taken a consort.

It was accompanied by palace-approved images of Koi wearing combat fatigues shooting weapons, flying a jet and preparing to parachute from a plane, as well as holding the king’s hand.

It was an intimate and rare glimpse into the private life of Thailand’s powerful, ultra-wealthy and inscrutable monarch, known as Rama X of the Chakri dynasty.

However, only a few months later, the king stripped his 34-year-old consort of all titles for “disloyalty” and apparent “ambition” to match the status of Queen Suthida, the king’s fourth wife.

According to the Royal Gazette, that decision was made to “reduce tension and potential trouble” in the royal household.

“His Majesty has monitored her behaviour since and found she was lacking of gratitude or actions fit for her position,” the announcement in the Royal Gazette said in October. “She was not satisfied with the position granted and has acted in every way to match herself with Her Majesty the Queen.”

Wednesday’s announcement, also published in the Royal Gazette, not only reinstated Koi but indicated her titles had never been removed in the first place.

Born on January 26, 1985, in Thailand’s northern province of Nan, Sineenat first worked as a nurse after graduating with a Bachelor of Science in Nursing from the Army Nursing College in 2008.

In 2015, Sineenat joined the king’s bodyguard corps, where she completed a variety of military courses, including jungle warfare and parachuting, and obtained a private pilot’s licence. She then moved up to serve as a major general before becoming the royal consort.

The Thai king’s personal life has attracted attention before, although Thailand is subject to strict lèse-majesté laws that make it illegal to insult or criticise the monarchy.

His third wife, Srirasmi Suwadee, has not been seen in public since he ended their marriage in December 2014 after her relatives were arrested and accused of misusing their royal statuses for personal gain. He also denounced his second wife, Sujarinee Vivacharawongse, and disowned their sons.

The king has dramatically bolstered his authority since his 2016 ascension to the throne, pulling the immense wealth of the crown under his direct control and restructuring key army units to his command.