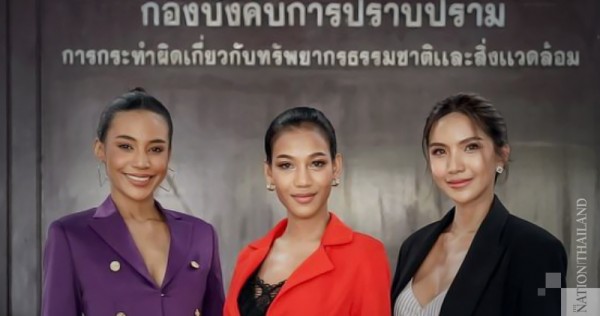 Three beauty queens from the Miss Grand Thailand pageant have urged the National Police to follow up the case of alleged forest encroachment by Palang Pracharath member of Parliament Pareena Kraikup.

On Friday, the Miss Grand Thailand page on Facebook posted that three beauty queens had met commander Pol Maj-General Pitak Uthaitham of the Natural Resources and Environmental Crime Division, to cheer him and his subordinates up.

The beauties also asked the National Police to follow up the case of MP Pareena, who allegedly encroached on the national forest reserve in Ratchaburi province.

The land encroachment allegation against Pareena made national headlines in February when the Royal Forest Department filed charges against her after months of investigation revealed that her Khao Son 2 chicken farm in Rangbua subdistrict of Jombeung district allegedly encroached on 711 rai, 2 ngarn and 93 square wah (approximately 115 hectares) of protected forestland.

‘We’re going to win this race’: Biden predicts victory as his lead over Trump grows