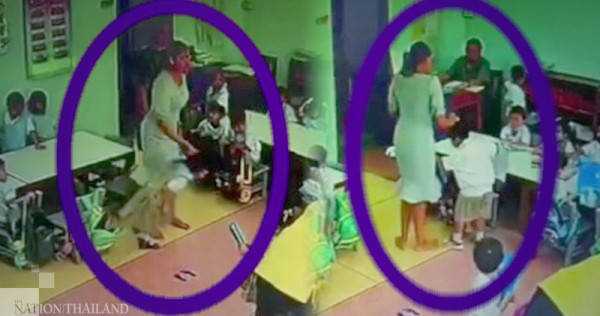 A school in Nonthaburi province on Friday apologised to the parents of kindergarten students who were subjected to physical abuse by a teacher.

Sarasas Witaed Ratchaphruek School has also offered legal assistance to the parents whose children were ill-treated by the teacher.

This week, a group of parents found their children unhappy about going to school and had wounds on their bodies.

These incidents made them reach out to each other. On Thursday they approached the school authorities and suggested using a CCTV camera in the children’s classroom.

The video showed the children being physically assaulted many times by a teacher, who was named as Onuma Ploadprong. The teacher reportedly banged the children’s heads on their desks, pushed them to the ground, and twisted their ears until they screamed in pain.

Other teachers too did not stop Onuma from abusing the children.

The school said Onuma was called for questioning and sacked after she confessed to her actions. The school said that it would punish other related persons as well.

The school representatives and parents have filed a complaint at Ratchaphruek Police Station in Nonthaburi on September 24.

The school also informed the parents that it would facilitate the prosecution of the teacher and other related persons by providing a legal team.

More solutions will be discussed with the parents on September 29.