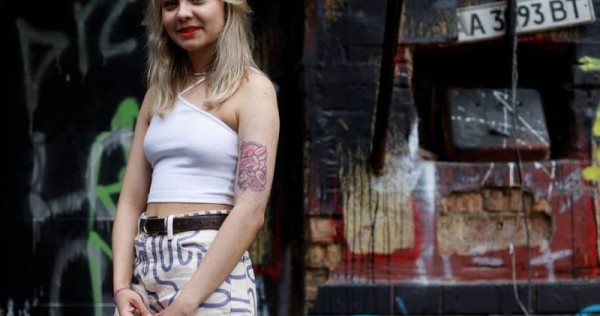 Every Saturday for the past seven weeks, a tattoo marathon has been inking customers, with funds raised being donated to Ukraine forces who have been fighting Russian troops since Moscow invaded Ukraine on Feb 24.

“We will keep doing this until the end of the war,” Filipchenko, who has lived in Kyiv for the past five years, told Reuters. “Maybe we will bring it back for victory day.”

On a typical Saturday, 50 to 70 punters get tattoos from a group of 15 artists.

“We did it for a week or two and it’s already the seventh week now… As long as we can take some capital and give it to the army, I think it’s the best you can do,” he said.

After fighting moved away from the Kyiv region in early April, cultural life has started returning to Ukraine’s capital. Restaurants and bars have reopened as groups of young people again fill Kyiv’s public spaces.

The tattoo marathon takes place in Kyiv’s trendy Podil district, a pre-war hipster hub which is showing signs of revival.

Myroslava Arnautova, 18, came to get her first ever tattoo. She decided to get a sketch of a bird originally drawn by the 85-year-old Ukrainian artist Lyubov Panchenko, who was killed during fighting in the Kyiv region town of Bucha in April.

“This is my first tattoo but now it feels like I had it all my life,” she told Reuters.

For some, inspiration came during the most terrifying days of the war.

Liliya Tolmachova, 22, chose one of a coffin bearing the words “Banderolka” (package), a word which also bears similarity to the name of Stepan Bandera, a Ukrainian nationalist resistance leader during the Second World War.

Tolmachova said the idea came to her as she was hiding in a school basement shelter during the shellings.

“This was meant in a humorous way… the parcels to Russia, (urging) them to take back their dead soldiers. We don’t want them here, please,” she said.