Talks on disputed oil fields between Cambodia and Thailand to resume 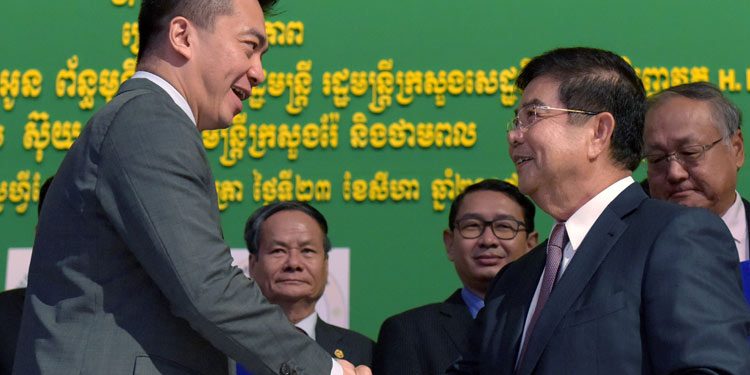 Negotiations on oil and gas development over the long-contested Overlapping Claims Area (OCA) in the Gulf of Thailand between Cambodia and Thailand will be resumed shortly after the viral pandemic ends, according to a Ministry of Mine and Energy’s official.

Cheap Sour, the Ministry of Mine and Energy’s director-general of the general department of petroleum said neither country had discussed the issue since a bilateral meeting last September.

According to Sour, both sides agreed to negotiate at the end of 2019 but with the COVID-19 outbreak, all talks have been postponeded. However, he said that negotiations will be reopened shortly after the pandemic ends.

“We are waiting for a good opportunity. The Thailand side also asked for a delay because of the COVID-19 pandemic,” he said. “They also have a new minister who needs time to study the issue. We will just wait to hear from the Thai side and we hope that the negotiations will start as soon as possible after the end of COVID-19,” he said.

During the 37th Asean ministerial meeting on energy in Bangkok in last September, Cambodia and Thailand agreed to rekindle negotiations on oil and gas development over the Overlapping Claims Area in the Gulf of Thailand.

Hong Vannak, a business researcher at the Royal Academy of Cambodia, welcomed the move, saying that a resolution of the long-contested Overlapping Claims Area would be not easy. However, he said, based on the law, the solution be reached peacefully.

“I think that the best way we need to resolve the issue is based on international maritime law and a bilateral agreement,” he said. “A re solution based on bilateral talks will provide a win-win situation involving sharing benefits between the two countries. If there are no other obstacles, and if we can extract oil from the area, it will help boost our economic growth.”

Development rights to the 26,000 square kilometre OCA, which overlaps the Cambodian and Thai borders in the Gulf of Thailand, have been a point of contention between the two neighbouring nations, both of which have claimed the area since the early 1970s.

A memorandum of understanding to jointly explore the area was signed in 2001 but was later shelved by the Thai government in 2009.

Talks over the joint effort to explore the region re-emerged when former Thai Prime Minister Yingluck Shinawatra took office in 2011.

Following the overthrow of the Yingluck government in May 2014, leaders of both countries sought to resume the talks.

The OCA is estimated to hold up to 500 million barrels of oil and gas deposits under the seafloor.

In the previous report, the International Energy Agency’s (IEA) predicted that Thailand’s gas production is expected to decline by 75 per cent by 2035 because domestic demand for natural gas is expected to rise during the period. The IEA said the resolution of Cambodia and Thailand’s long-standing dispute over the OCA is a promising and long-term asset to Thailand’s energy outlook to 2035

So far neither side has yet extract any oil and gas from the area. Cambodia is currently still exploring its offshore oil in Block A, which is being developed by Singapore-based firm KrisEnergy Ltd.

Before the pandemic, the company claimed it would be able to meet its schedule to extract its first drop of oil later this year but the dream may gone sour because the virus crisis has pushed down

the price of oil globally to an historic low, discouraging the world’s oil producers from extracting oil without suffering severe losses.