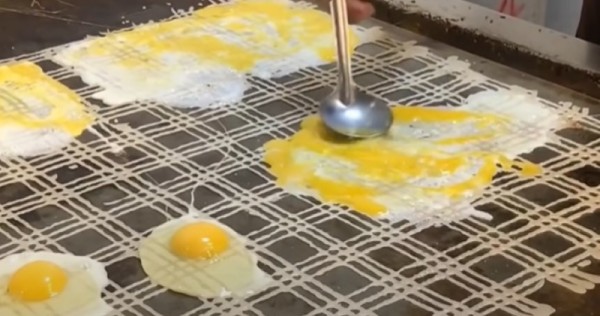 TAIPEI — Taiwanese omelet is a popular breakfast option for many Taiwanese. A recent video on the making of a Taiwanese omelet has become an instant hit on Reddit, causing foreign users to exclaim: “It looks so delicious!”

The user u/aloofloofah posted the video, titled “Making Taiwanese chicken and egg omelet,” in which the chef first lays the batter in rows on the frying table and draws a checkered pattern.

Next, he puts eggs on the cooked batter and sprinkles basil on top of the mixture.

After the batter has solidified, the chef shovels up slices of the omelets and wraps chicken in it. That’s it!

The checkered omelet video has attracted many responses from foreigners, many of whom said it looked so delicious that they were hungry.

In response, some said that “Please send it to Texas” while another asked, “What are the lines? Glue?”

Another commented: “Looks like I missed out on something when I visited last year, darn guess I’ll just have to go back…”

On the other hand, a Taiwanese said that he didn’t know about this omelet maker.

The shop specialises in traditional Taiwanese omelet made of flour and water. You can choose from wrapped vegetables or rice, and each omelet costs NT$35 – 60 (S$2 – 3).