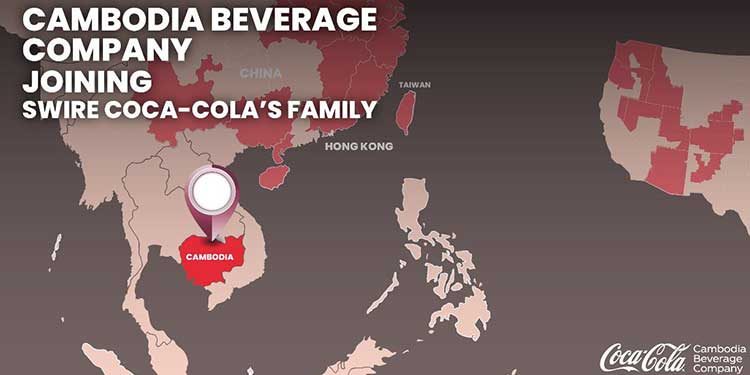 Swire Coca-Cola Limited, a wholly-owned subsidiary of Swire Pacific Limited, announced the completion of its acquisition of the Coca-Cola subsidiary with bottling business in Cambodia, a release said.

The transaction is Swire Coca-Cola’s first investment in South East Asia, expanding its operating footprint into a new region. The completion of the deal reflects the vision to expand Swire Coca-Cola’s footprint across a vibrant and dynamic region with immense growth potential, as the company welcomes around 900 employees on board to its thriving team.

“The completion of the Cambodia agreement marks a major milestone for Swire Coca-Cola,” said Patrick Healy, Chairman of Swire Coca-Cola. “As our first foray into South East Asia, we are thrilled to work alongside our new colleagues and excited by the significant opportunities of the Cambodia beverage market.”

“We are delighted to have completed the acquisition of the Coca-Cola bottling business in Cambodia. Leveraging our proven strengths in commercial capabilities, marketing, supply chain, customer service and digitalisation in our existing operating regions combined with the strength and local expertise of our new colleagues, we will be able to continue serving the needs of our customers and consumers in Cambodia,” said Karen So, Managing Director of Swire Coca-Cola.

“Swire Coca-Cola is a strategic bottling partner for the Coca-Cola system with current operations in Greater China and parts of the western US,” said Claudia Lorenzo, President, ASEAN and South Pacific of The Coca-Cola Company.