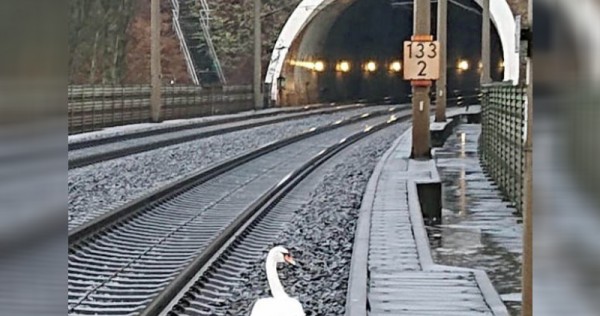 A swan in Germany reportedly blocked a high-speed railway line as it was “mourning” its companion’s death, leading to a 50-minute delay of 23 trains on Dec 23. Local police and firefighters later moved the swan to a nearby river so that the train service could resume.

British media The Guardian reported on Monday that the swan was pictured mourning its dead companion near the railroad in Fuldatal, central Germany. Its partner allegedly died after it flew into a high-voltage wire above the railway tracks.

The swan sat in the middle of the railway track and blocked the train from Kassel to Göttingen, forcing the delay of more than 20 trains.

According to the local police, firefighters with specialist equipment moved the swan blocking the railroad tracks to the Fulda River, where it was later released.

Responding to the news, social media users commented, “If it happened in Taiwan, the swan might become a three-cup fat goose,” while another said, “Swans know more about love than people.”

One speculated that the sad bird would become a “special bento” in Taiwan.