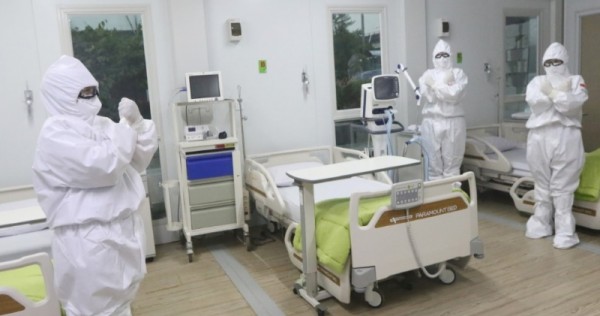 JAKARTA – Indonesia’s Health Minister Terawan Agus Putranto is in hot water because of a recent comment about having deployed thousands of medical interns to the front lines of the nation’s Covid-19 treatment efforts.

“We still have 3,500 interns and 800 Nusantara Sehat (Archipelago Health programme) workers – In addition to 685 volunteers such as lung specialists, anesthetists, internists, general practitioners and nurses – who are ready to be deployed and to help if a larger workforce is needed,” Mr Terawan said last week.

He said 16,286 medical interns and volunteers had already been deployed to Covid-19 referral hospitals and labs.

His statement, the latest of his comments to attract public criticism, followed reports that more than 100 doctors had died of Covid-19 and growing concerns that the nation’s healthcare system was facing collapse.

In the Indonesian system, recent medical graduates must, after passing a national competency exam, sign up for a one-year internship.

The internship is split between a hospital and a community health centre (Puskesmas), and each segment is six months long. This period of hands-on study is required to obtain a medical licence and to be eligible for subsequent specialisation residencies.

In response to the pandemic, the government has shortened the internship period to nine months, decreasing the length of time spent at hospitals in an attempt to minimise interns’ exposure to Covid-19.

In the programme, interns treat patients under the supervision of doctors. The government pays interns assigned to the western part of the country Rp 3.15 million (S$290) per month, and those in the eastern part Rp 3.6 million per month.

But facing the uncertainty of the pandemic, many young doctors-to-be have decided to put off their internships. In addition, graduates who have tested positive for Covid-19, are pregnant or have comorbidities are currently prohibited from taking part in the programme.

Only about 60 per cent of the quota was filled for the first 2020 internship cohort, which began in May, two months after Indonesia reported its first Covid-19 cases, according to the Indonesian Doctor Internship Committee (KIDI), a team appointed by the Health Ministry to oversee the programme.

However, the numbers improved in August and September. Some 3,100 people enrolled out of the 3,400-intern quota, KIDI chairman Robby Pattiselanno said.

A 25-year-old doctor-to-be who started her internship last month at a Covid-19 referral hospital in East Java, a hotbed of contagion in the country, said she could have started the internship in May but had decided to postpone.

The intern, who wished to remain anonymous, said she put the programme off after learning that it required doctors to be relocated if necessary.

“I was personally waiting to see if my friends in the previous batch would have to handle Covid-19 patients directly and if any of them were infected. And although some of them did eventually handle those patients and were infected, I thought it was still within what I could handle,” she added.

The intern said that at her hospital, confirmed Covid-19 patients had to be attended to exclusively by staff doctors. But as the interns were assigned to the emergency room, they would have little idea whether the patients they were treating had the virus until the patients were tested.

She said she saw about three suspected or probable Covid-19 cases each shift and that many patients who visited the non-Covid-19 section of the emergency room complained of breathing difficulties.

Although the government requires all interns to attend a two-week virtual training programme on Covid-19 prior to deployment, the intern said she could not help but feel worried.

“I won’t be visiting my family (while I’m participating in the internship),” she said.

Hera Afidjati, 24, who is set to start her internship in September at another Covid-19 referral hospital in East Java, said that with no certainty about when the Covid-19 pandemic would abate, she had decided to take the risk.

Hera felt it was her duty to help address the outbreak, but she hoped the government would come up with better solutions, including by identifying the root causes of medical workers’ deaths.

“This is not just about interns. Each life matters,” Hera said. “One specialist doctor can’t be replaced by a number of general practitioners. It takes many more years to study the field, and the competencies are different. It’s not apples to apples to compare the doctors who died to 3,500 interns.”

In Indonesia, a country with 0.52 general practitioners and 0.13 specialists per 1,000 people, at least 117 doctors have died of Covid-19, 53 of whom were specialists, according to the Indonesian Medical Association (IDI).

Robby of the KIDI said some interns had caught Covid-19, but he did not disclose the number. He said they all had mild symptoms or none at all.

He noted that interns were prohibited from treating Covid-19 patients in isolation rooms and intensive care units and defended Mr Terawan’s statement, saying that the interns had indeed been deployed but as support doctors who would be assigned to screen patients in emergency rooms.

“Don’t look at it as all these 3,500 intern doctors being assigned to isolation rooms. Services start from screening and triage at the ER. In normal situations, one doctor can do A to Z alone, but now, every stage requires different doctors,” he said.

But interns have concerns beyond contracting the virus. They are also worried about missing opportunities to attain skills and knowledge.

Robby said doctors always had the option to put off their internships and wait until the health crisis was over, but he acknowledged it could put them at disadvantage because of concerns of losing competence.