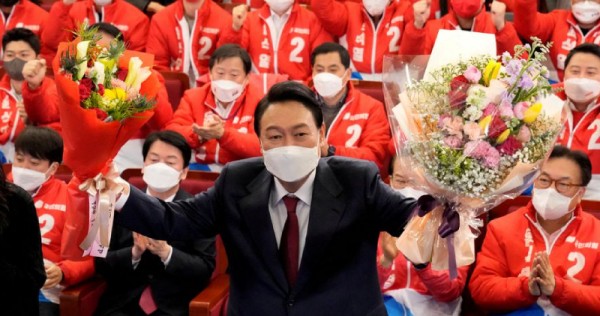 SEOUL – South Korean president-elect Yoon Suk-yeol’s decision to use the country’s gender wars as a campaign platform for his successful election earlier this month may have backfired.

Yoon, who won an unprecedented tight March 9 election, had promised to abolish the government’s gender ministry, a pledge that helped engage young male voters spearheading a backlash against feminism in South Korea.

Fulfilling the pledge, however, requires approval from parliament, which is controlled by the Democrats, who currently oppose the idea. Opinion within his own People Power Party (PPP), meanwhile, is split amid concerns about further alienating women ahead of key local elections in June.

Cho Eun-hee, a newly elected female PPP lawmaker, is among those calling for the Ministry of Gender Equality & Family’s mandate to be boosted, via the creation of a new agency if necessary.

“Despite its numerous positive functions, the ministry has been criticised for fuelling gender conflicts … but it’s not all or nothing, we need to gather wisdom to find a forward-looking alternative,” Cho said.

The ministry has become a lightning rod for an increasingly acrimonious gender debate in the country of 52 million where several inequalities remain – the women’s labour market participation rate is below the OECD average and it has the worst gender pay gap in the same group.

However, in a post-pandemic cutthroat job market, some young men feel that attempts to redress the balance have gone too far. Mandatory military service for young men – and not women – has come under the spotlight, while measures such as financial subsidies for women living alone have been dubbed “reverse discrimination.”

Yoon, who also vowed to raise wages for military conscripts and scrap gender quotas for public sector jobs after he takes office in May, was backed by around 60per cent of male voters in their 20s.

On the flipside, just 34per cent of women in their 20s voted for Yoon, defying pre-election polls projecting much higher support among that demographic.

The Democratic Party, eyeing the gender issue as a driving force to regroup following the election defeat, has appointed as its new interim leader a 26-year-old feminist who has been a sharp critic of Yoon’s policies.

The origins of the ministry date back to 1988 when an office was set up under the prime minister to promote women’s status in a male-dominated Confucian society, before it was scaled up in 2010 to incorporate broader gender and family affairs.

While some blame its “feminist” rhetoric for stoking anti-men sentiment, it has also come under fire across the political spectrum in recent years for defending high-profile ruling party politicians accused of sex abuses. It was also criticised for helping the outgoing Democrat Party devise policies during the election campaign, instead of remaining neutral.

A Realmetre poll released in January showed around 52per cent of Koreans supported shuttering or refurbishing the ministry.

“The ministry had failed to address calls for reform, which eroded public trust and raised concerns about intensifying gender divide,” said Koo Jeong-woo, a sociology professor at Sungkyunkwan University.

“Some people fear that they might lose their benefits and indispensable help, and that’s where the president-elect should play his role, to alleviate their concerns.”

The ministry also works to prevent sex crimes and domestic violence and protect victims, and support children, single parent and other needy families – programmes supporters say would be undercut if parcelled out to other ministries.

Many women are concerned scrapping the ministry would be regressive at a time when more work was needed on gender equality.

“The ministry should be gone one day, but we are not there yet,” said Kim Ji-yun, 22, who voted against Yoon.

WING Bank Cambodia – A bank for every Cambodian, from dreams to reality