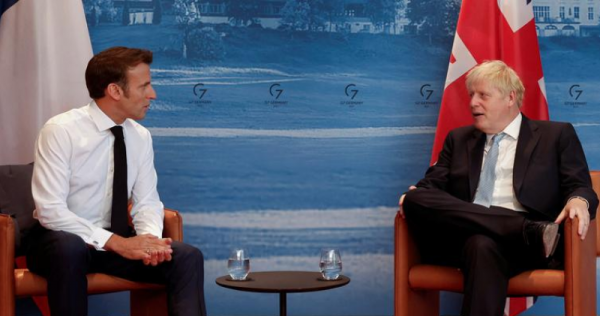 SCHLOSS ELMAU, Germany — After clashing last year (2021) over sausages and submarines, France’s Emmanuel Macron and Britain’s Boris Johnson were all smiles at a G7 summit on Sunday (June 26) with disputes over Brexit not even coming up at bilateral talks focused mainly on Ukraine.

The leaders of Europe’s two main military powers jovially exchanged pleasantries at the start of their meeting, reflecting what a French presidency official described as a deliberate attempt to “revitalise the relationship and warm it up”.

The two had decided to focus on Ukraine and the consequences of the war there, rather than issues that had divided them in the past.

“The word Brexit wasn’t mentioned, nor was the Northern Ireland protocol,” the official said, referring to terms Britain negotiated for trade between the EU and the British-ruled province, which Johnson has threatened to tear up.

At the last G7 summit a year ago, held on the coast of western England, Johnson demanded new rules to import cold meat into Northern Ireland, a quarrel dubbed the “sausage wars”. In September, Paris became furious at London for agreeing a trilateral deal with the United States to supply submarines to Australia, replacing plans for Canberra buy French ones instead.

Johnson’s office said he and Macron agreed to provide more support for Ukraine.

“They agreed this is a critical moment for the course of the conflict, and there is an opportunity to turn the tide in the war,” a Downing Street spokesperson said in a statement.

Ahead of the meeting with Macron, Johnson was asked whether France and Germany were doing enough to help Ukraine. Johnson, praised by Kyiv for providing support viewed as more robust than that of some other European leaders, focused his answer on Germany without mentioning France.

A second French presidency official said Macron had brought up the subject of a European Political Community, an idea the president brought up last month.

The aim would be to create a new structure, allowing closer cooperation with countries seeking EU membership or wanting closer ties with the bloc, suggesting post-Brexit Britain could be part of it.