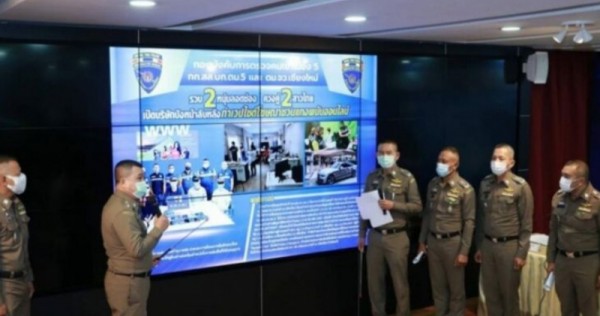 Immigration Police Region 5 on Wednesday (July 15) announced the arrest of Singaporeans Chay and Anthony (last names withheld), and Thais Natpaphas and Piyaporn at a house in Chiang Mai’s Saraphee district for running a gambling website.

“We had received a tip-off from local villagers of an illegal online operation at the house and had requested a search warrant from Chiang Mai provincial court to investigate the house along with police from Saraphee Station,” said an Immigration Police officer.

“At the scene we found the four suspects using laptop computers to run an online gambling website and using several mobile phones to contact customers, so we arrested the suspects and confiscated all evidence for further investigation.”

Police said the suspects had revealed that the website was financed by a Malaysian businessman who hired famous Thai event models, also known as “pretties”, to host live sessions online to attract customers into gambling on the website.

Police are investigating the website to track the owner as well.

Covid-19 pandemic has caused rise in ‘broken heart’ syndrome, according to research