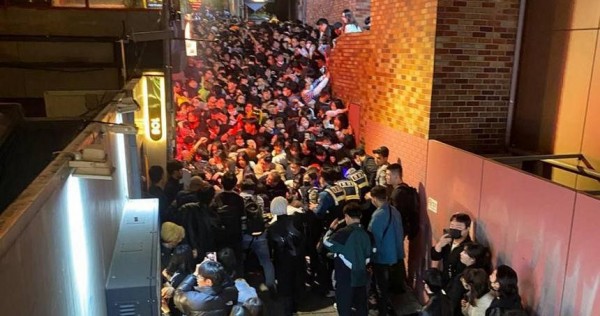 SINGAPORE – Having just arrived in Seoul on Saturday, a Singaporean ended in the middle of a massive crush of people that claimed at least 153 lives as Halloween festivities turned tragic later that night.

Mr Koh Ming En, 25, and two other Singaporeans had gone to the Itaewon district in South Korea’s capital city to enjoy the festivities, but he was soon separated from his friends and had to fend for himself.

Recalling his harrowing experience, the videographer told The Straits Times on Sunday: “At some points, people were being pushed like a ‘wave’. There were people losing their balance. My friends and I were panicking and we were just trying our best to stay alive in the crowd.”

As they tried to find a way to get away, the trio reached a slope that led to an exit, but amid the burgeoning crowd, Mr Koh was pressed against a wall and lost sight of his friends.

Mr Koh said he was also finding it hard to breathe from being sandwiched between people.

He then saw a ledge about half a storey from the ground and climbed onto it, hoping to enter a bar from its balcony, but he was stopped by a bouncer.

“When I was standing up on the ledge… there were hands reaching out to me from below, wanting me to pull them up. I tried but couldn’t do it because it was dangerous,” said Mr Koh.

Holding on to what looked like a wire, he inched along the ledge and reached an area that was relatively spacious. But he could not get back to the ground as it was too high to jump down.

Mr Koh decided to slide down a sloping shophouse roof that was near the ledge and jumped on some rubbish bags before making it out to safety.

“I was the last one to get out. Both my friends were not hurt. I suffered some cuts, but it was nothing compared to those who fainted or even got stepped on. I can’t imagine what would have happened if we had continued staying there. We could have died,” he said.

Another tourist, Ms Katie Brock, 37, a graphic designer from Canada who is in Korea for a two-month holiday, was also fortunate to escape to safety.

Ms Brock, who was with a friend, was pushed into a narrow alley near Hamilton Hotel, where the incident had started. People were jammed against one another so tightly that no one could move in either direction, she said.

“We heard a couple of isolated screams from up ahead and saw people filming. I thought there was perhaps a scary performance but couldn’t see what was happening,” Ms Brock told ST.

As the crowd swelled, her shoes were ripped from her feet, and she started screaming from the pain as people started stepping on her feet. She was later pulled into a small alcove of a club’s entranceway.

“All I could do was resolutely brace myself against the wall… The club wouldn’t open its door despite the pounding and the pleas. I was thinking… if it gets worse, we might actually die here, with the club workers watching us from the other side of the glass,” said Ms Brock. The door eventually opened and Ms Brock and other people managed to enter the club, which is in a basement. Rescue services arrived later and let them out of the club around 11.30pm (10.30pm in Singapore).

Describing the scene, she said: “(Some people were in) stretchers but many (were) carried by their limbs, their faces blue. The street at the end of the alley was lined with dozens of ambulances and bodies.”

She said passers-by were helping to perform first aid on the injured, and there were people with blankets covering them.

Limping around on her swollen and bruised feet, Ms Brock and her friend eventually managed to catch a taxi back to her apartment in Hongdae, another popular neighbourhood in Seoul not far from Itaewon.

Singaporeans on holiday in South Korea told ST they were shocked by the tragedy, with some of them deciding to turn back only at the eleventh hour after they saw the swelling crowds.

#BREAKING: #SouthKorea's fire department said 81 people have breathing problems after the #stampede at Itaewon in #Seoul, South Korea Saturday night when over 100 thousand revellers crammed into the place for #Halloween celebrations.#SeoulStampede pic.twitter.com/QwyWcYTj43

One of them, who wanted to be known only as Farah, said she was at Hongdae with her 60-year-old mother and her 18-month-old toddler. They had planned to head to Itaewon but she decided to run for it when she started to sense that the growing crowds were not safe.

She took an Uber back to her hotel and was woken up by sound of sirens around 10.30pm, which lasted till about 4am. She did not realise what had happened until she saw one of her group chats.

“We will be avoiding Itaewon for now and keeping a close lookout for emergency alerts being sent out. We will also try to make our way back by 8pm if we can to avoid getting caught in any crowds,” she said.

South Korea on Sunday declared a national mourning period over the deaths caused by the disaster.

The Halloween event was the first in three years after the country lifted Covid-19 restrictions and social distancing. Many of the partygoers were wearing masks and Halloween costumes.

At least 30 killed in car bombings in Somalia’s capital