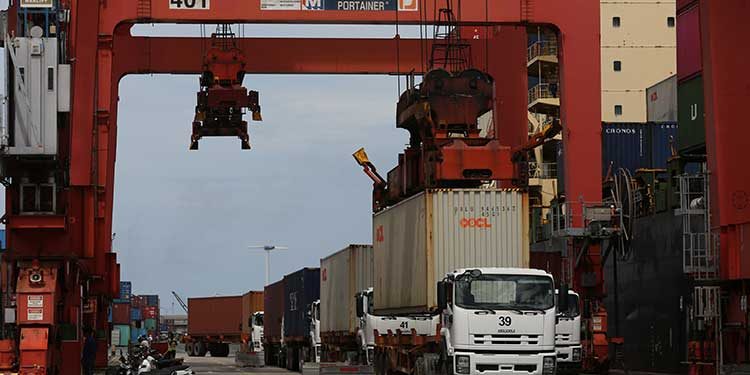 The publicly listed state-owned Sihanoukville Autonomous Port (PAS) is in the process of transfer of ownership title deeds to a buyer after they signed a sale and purchase agreement to sell the 130-hectare land located in the Bet Trang commune of Preah Sihanouk province, according to the latest report released yesterday on Cambodia’s stock exchange.

The Third Quarterly Report 2022 of PAS released on the Cambodia Securities Exchange (CSX) shows that the listed port firm received $2 million as a deposit on the date of signing the agreement from the buyer who promised to pay the remaining amount upon the completion of ownership title deed (LMAP) after both parties agreed at $20 per square metre.

The report also states that the total contract value is $26 million and the process of ownership title deeds transfer has not been completed yet thus far as it was expected to by June 2022, which does not allow the PAS to recognise the amount as its gain for the nine-month period ended September 30, 2022.

“The risk and rewards have not been completely transferred to the buyer. This size of the land might be reduced as public road construction is taking place on it. The management is in the process of transferring the hard title deeds,” the report pointed out, adding that the actual size of the land will be known once the Ministry of Land Management, Urban Planning and Construction (MLMUPC) issues the hard title deeds.

The report also indicated that the buyer will settle based on the confirmed size at $20 per square metre. PAS signed the sale and purchase agreement with the buyer to sell the parcel of vacant land on November 10, 2021, which was acquired for capital appreciation. Since then, it has been classified and presented as an investment property.

Lou Kim Chhun, Chairman and CEO of PAS, said renovated the new wharf that was constructed in 1969 at 350 metre in length to become an additional container terminal of 243 metre in length, which currently has only two terminals amid increasing volumes of cargoes and containers throughput.

Kim Chhun went on to add that the construction of a new Container Terminal in Phase 1 with 350 metres in length by 14.5 metres in depth will allow larger container vessels in the region calling to PAS which would solve the water depth constraints for the port. Also, the Ocean freight cost would be similar to neighbouring counties and the region which would contribute to trade facilitation and the development of Cambodia’s economy.

The project is expected to be completed by mid-2025, and the container handling capacity will reach 1.15 million TEUs in one year when this new container terminal is launched for operation in the upcoming year 2025, according to Kim Chhun. “We are going to continue [our] efforts to improve the business and service operation and to achieve the best result for the benefit of our shareholders,” he said.

“We have strengthened the work efficiency and built additional infrastructure to meet the increasing demand of customers and the growing economy,” said Kim Chhun, adding that the new container terminal would consist of three units of quality control, nine units of TRGs, 2 units of Empty Reach Stackers, and 16 units of container trucks, and 1 set of Auto container terminal management system.

Australia PM tests positive for Covid-19, to work from home