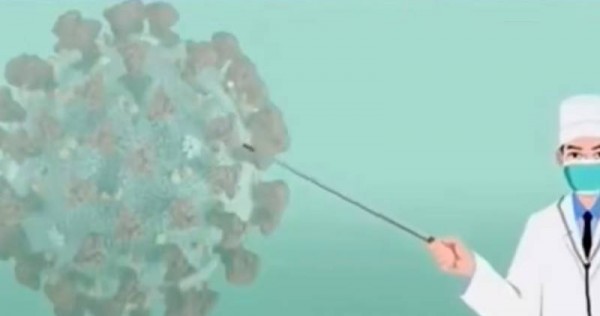 A North Korean public health video on the coronavirus has found support online in China, with commenters applauding its “scientific approach” and absence of scaremongering.

The 2½-minute video about the Omicron variant was posted on microblogging site Weibo and video platform Xigua on Sunday amid China’s continued efforts to try to stamp out outbreaks with its dynamic zero-Covid policy of lockdowns, mass testing and vaccination.

The video was uploaded by a reporter with Chinese broadcaster Phoenix TV who said it was produced by state-run Korean Central Television in North Korea.

The video urged people to seek medical attention if they experienced Covid-19 symptoms and said most Omicron patients would have mild symptoms, requiring only outpatient care or treatment at home.

It included illustrations of mask wearing, hand washing, social distancing and disinfection. There was no mention of vaccination.

One person commenting on the video said in Chinese: “It turned out that I underestimated North Korea. This video is based on science and is easy to understand, seeks truth from facts, and does not create panic.”

North Korea is facing its first confirmed Covid-19 outbreak with no known vaccine programme. In all, 42 people had died since late April and at least 296,180 more have had fever symptoms, state news agency KCNA reported on Sunday (May 15).

The country’s leader, Kim Jong-un, said on Saturday that the spread of Covid-19 had put the country in “great turmoil” and called for an all-out battle to overcome the epidemic. But there is no sign that a rigorous testing or treatment campaign is under way.

Omicron had been associated with lower disease severity when compared to the Delta variant, according to the World Health Organisation (WHO).

The WHO said it supported North Korea in developing a Covid-19 vaccine deployment plan.

Meanwhile, China is facing rising pressure over the prolonged lockdown in Shanghai and the huge social costs of its zero-tolerance policy, including food shortages in the country’s wealthiest city.

In Beijing, for example, residents are required to show Covid-19 test results – which remain valid for just 48 hours – to enter malls, supermarkets, restaurants, hotels, commercial buildings and other public places.

The capital reported 38 new cases on Sunday as of 3pm, with officials saying the fight against Covid-19 was at a stalemate. Residents in the four districts of Chaoyang, Fangshan, Shunyi and Fengtai, would continue to work from home and remain under “closed-loop management”, municipal authorities said.

Throughout the country, authorities reported 1,718 new cases, including 226 symptomatic cases. Both figures were down by more than 10 per cent from a day earlier.

But two officials from provincial-level health commissions have voiced doubts about the country’s zero-Covid policy, medical journal The Lancet reported on Saturday.

The officials, who spoke on condition of anonymity, said policymakers did not listen to medical expert opinions any more, any deviation from zero-Covid was punished and the policy was not cost-effective.

Earlier this month, President Xi Jinping said China’s handling of the Covid-19 outbreak in Shanghai “will stand the test of time” and pledged to fight any attempt to “distort, question and challenge” the country’s policies.

The Chinese foreign ministry also accused Tedros of making “irresponsible” remarks after he said the country’s zero-Covid policies were unsustainable.

Censors moved quickly to scrub the comments from the Chinese internet, removing a Weibo post on the United Nations account on Wednesday.

Chestertons, a global real estate agency based in the United Kingdom, launches services in Cambodia