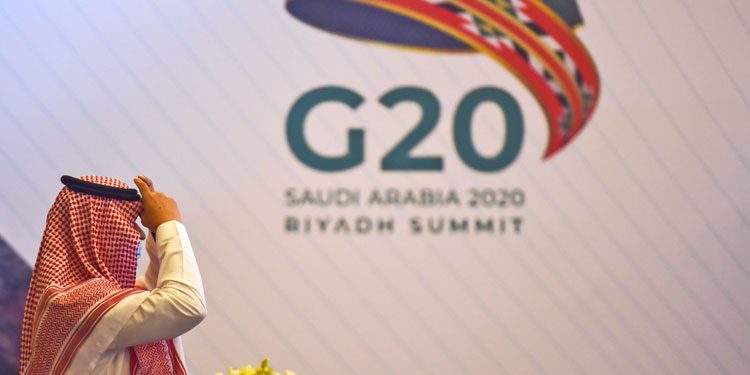 AFP – Saudi Arabia hosts the G20 summit on Saturday in a first for an Arab nation, but the scaled-down virtual format could limit debate on a resurgent Coronavirus pandemic and crippling economic crisis.

The two-day meeting of the world’s wealthiest nations follows a bitter US election the results of which remain disputed by President Donald Trump and comes amid criticism of what campaigners call the group’s inadequate response to the worst recession in decades.

Held under the shadow of a raging pandemic, the summit which is usually an opportunity for one-on-one engagements between world leaders, is reduced to brief online sessions on pressing global issues – from climate change to growing inequality.

Discussions are expected to be dominated by the “implications of the pandemic” and “steps for reviving the global economy”, a source close to the Saudi organisers said.

New vaccine breakthroughs have raised hopes of containing the virus, which has infected 55 million people globally and left 1.3 million dead. The Paris-based OECD projects global economic output will contract by 4.5 percent this year.

G20 nations have contributed more than $21 billion to combat the pandemic, including production of vaccines, and injected $11 trillion to “safeguard” the virus-battered world economy, organisers said.

Mistrust between member states has hampered coordination, with a US Treasury official accusing China – a top creditor to poor countries – of a “lack of full participation” and transparency.

“We are facing the world’s largest humanitarian crisis and women in developing countries are bearing the worst impacts of the health and economic fallout,” said Action Aid’s Katherine Tu.

“Yet the G20 has its head in the sand and is failing to respond to the urgency of the situation.”

In a letter to G20 leaders released Tuesday, UN Secretary-General Antonio Guterres called for “bolder measures” and emphasised that “further debt relief will be required”.

Saudi Arabia’s King Salman will preside over what some observers call “digital diplomacy”.

US Secretary of State Mike Pompeo, a staunch Trump defender, will be present in Saudi Arabia during the summit.

It was unclear whether Trump will speak at the event alongside world leaders, many of whom have already congratulated his succesful challenger, President-elect Joe Biden.

“Trump’s actions at the summit aren’t likely to have as much of an effect as they might have in previous years,” Ryan Bohl, of US geopolitical think-tank Stratfor, said.

“Even should he not attend, his lame duck status will make that relatively palatable – it would be just one more norm he upsets on his way out.”