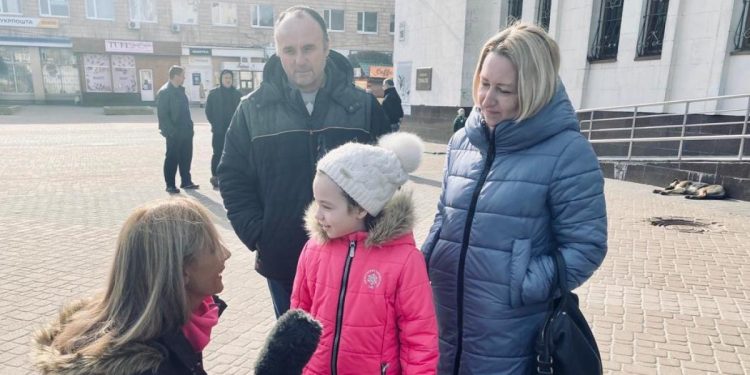 Kyiv — Diplomats from Ukraine and Russia were arriving in Turkey on Monday for a new round of face-to-face peace talks. Turkish officials had said the latest round of direct negotiations, aimed at crafting an agreement for a ceasefire, could begin as soon as Monday, but a spokesman for the Kremlin in Moscow said it would likely be Tuesday.

Despite the ongoing negotiations between the two sides, the fighting continues. Over the weekend, Russia seemingly focused its efforts on capturing territory in Ukraine’s east, including the devastated city of Mariupol. Vladimir Putin’s forces have failed to take the city, and many others, despite weeks of relentless bombing.

CBS News correspondent Debora Patta met residents of the besieged port city who managed to escape to a town near the capital, where Ukraine’s president offered a message to Russian media.

In the unusual interview with Russia’s government-controlled news outlets, President Volodymyr Zelenskyy spoke to four prominent journalists from the country, detailing the horrors of the war being waged on Ukraine.

The Kremlin promptly banned any Russian outlets from reporting what he said or using video of the interview, but it was broadcast outside the country.

Patta said that, given what she and her team have seen on the ground, it’s no wonder the Putin regime didn’t want the Zelenskyy interview aired in Russia.

Plumes of black smoke choked the sky over the weekend after a Russian cruise missile slammed into a fuel depot in the western city of Lviv. Firefighters battled for 12 hours to put out the blaze.

The fighting and artillery fire intensified around Kyiv, too, leaving battle-scarred landscapes around the capital.

But it is the apocalyptic scenes from Mariupol that really show the extent of the human toll of Russia’s war in Ukraine.

Patta met Valentina, who was born, married and was raising her children in a house in the southern city. Her lifetime of memories was reduced to rubble along with her home.

“What is left for us?” she asked through sobs. “There’s nowhere to live here now.”

Alexander stayed behind, and is just grateful to be alive.

“I survived,” he told his daughter in a message, breaking down in tears. “Thank God… your dad is alive.”

Victoria Medynska remained in the hell of Mariupol for three weeks before finally making the death-defying car trip out of the city. She escaped to the town of Brovary, on the outskirts of Kyiv. All she has left of her life in Mariupol are precious photos and videos stored on her phone.

“I cried, because – it’s hard to speak, I’m sorry,” she told Patta, unable to recount the terror she left behind.

Russian airstrikes and artillery have left the street that Medynska and her family called home a ruin of broken concrete and twisted metal.

Her daughter Masha, just seven years old, remembers everything, including the fear. Her school was bombed, and her childhood shattered.

One year ago, Masha celebrated her birthday surrounded by laughter. On Sunday, it was a very different celebration as Masha turned seven – no longer a carefree schoolgirl, but one of the 4 million children displaced by this war.

“I had so many friends,” she told Patta. “Now I have no friends.”

A humanitarian corridor was opened briefly on Sunday, allowing the evacuation of just over 500 more people from Mariupol, but officials say there are still around 160,000 people trapped there, and they’re running very low on food and water.