Russia says it will “drastically reduce” military activity near Kyiv 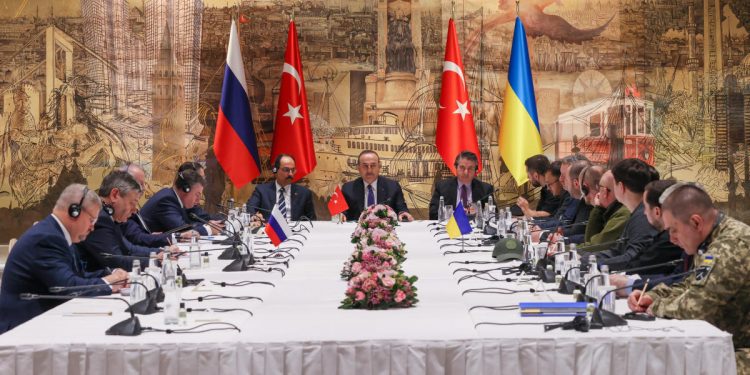 Ukrainian and Russian negotiators sat face-to-face for the first time in weeks on Tuesday in Turkey, resuming direct talks that Ukraine‘s government hopes will bring a ceasefire after more than a month of Vladimir Putin’s brutal invasion. There appeared to be tangible progress, with Russia declaring that it would “drastically reduce” its offensive around Kyiv and another city “to increase mutual trust” and enable the talks to continue.

Ukrainian officials have been pushing for a ceasefire agreement to enable thousands of civilians to evacuate from besieged towns and cities that are still being bombed by Russian forces.

Russia’s lead negotiator Vladimir Medinsky emerged from Tuesday’s talks to say his country had received “a clearly formulated position from Ukraine,” and that “the possibility of making peace will become closer” as the two sides continue to work quickly to reach compromises.

David Arahamia, one of the Ukrainian negotiators, declared a “first victory” merely by having the venue for the negotiations moved from Belarus, a Russian ally on Ukraine’s northern border, to Turkey. “We see Turkey as one of our guarantor countries for Ukrainian safety.”

But the most significant declaration after Tuesday’s talks came from Moscow, where the ministry of defense issued a statement saying it would “reduce military activity” in order to “create the necessary conditions for further negotiations.”

Ukraine’s leaders have made it clear since last week that they’re willing to accept a formal neutral status for the country, ruling out NATO membership and accepting some constraints on its military, in exchange for an end to the war.

“Due to the fact that negotiations on the preparation of the treaty on the neutrality and non-nuclear status of Ukraine, as well as on the provision of security guarantees to Ukraine, are moving into practice, taking into account the principles discussed during today’s meeting, by the Ministry of Defense of the Russian Federation — in order to increase mutual trust and create the necessary conditions for further negotiations and achievement of the ultimate goal… a decision was made to radically, at times, reduce military activity in the Kyiv and Chernihiv directions,” Russia’s Deputy Minister of Defense Alexander Fomin said.

It wasn’t clear to what extent Russia’s military would reduce its artillery barrage against Kyiv’s suburbs and the decimated city of Chernihiv, close to the Russian border, but it was the first time Moscow had given any indication that it would reduce the intensity of its “special military operation” since it began on February 24.

Russia’s defense ministry has said it will now focus its efforts on eastern Ukraine to ensure the “independence” of two breakaway regions held by Moscow-backed separatist fighters.

Turkey’s Foreign Minister Mevlut Cavusoglu said the round of Russia-Ukraine talks in his country had brought “the most meaningful progress” to date toward ending the war, but his American counterpart, Secretary of State Antony Blinken, was more cautious.

“I would leave it to our Ukrainian partners to characterize whether there is any genuine progress and whether Russia is engaging meaningfully,” Blinken told reporters on Tuesday. “What I can say is this: There is what Russia says, and there is what Russia does. We’re focused on the latter. And what Russia is doing is the continued brutalization of Ukraine and its people. And that continues as we speak.”

While Russia’s defense ministry pinned the change in tactics to the peace talks, a former Ukrainian ambassador told BBC News that, in his view, it was down to Russia being forced to accept realities on the ground.

“Maybe they realize that they are not winning this war, and they will never win,” Ukraine’s former ambassador to Austria, Dr. Olexander Scherba told the BBC after Tuesday’s negotiations. “We know what we are fighting for, Russians don’t.”

CBS News senior foreign correspondent Holly Williams reports that Putin’s ground forces have been stalled for weeks in their approach to Kyiv and other towns, and they’re taking heavy losses. As many as 15,000 Russian troops have been killed in just over a month of fighting, according to an estimate by a NATO official.

Unable to advance due to logistical failures and stiff Ukrainian resistance, Russia has resorted to a war of attrition, pummeling cities from afar with missiles and artillery.

Ukrainian President Volodymyr Zelenskyy said in a video address Monday evening that Russia’s “ruthless war against our nation” had killed at least 143 children.

He lauded Ukraine’s defense forces for refusing to let Russian troops take Kyiv, and said they were even pushing Putin’s military out of some towns it had seized near the capital.

“Our defenders are advancing in the Kyiv region, returning control over Ukrainian territory,” Zelenskyy said. “The occupiers are getting pushed away from Irpin, from Kyiv. However, it is still too early to talk about security in this part of the region. The fighting continues.”

Williams and her team saw first-hand this week that advances by Ukraine’s troops do not guarantee safety for the people living in towns that are reclaimed from Russia.

Williams was with Ukrainian forces as they traveled by road on Monday toward the town of Makariv, about 40 miles west of Kyiv. Ukraine said its troops recaptured Makariv last week, but as they approached, the Ukrainian forces spotted Russian drones flying overhead.

It was a tense situation. Twice the convoy left their vehicles by the side of the road and scattered for cover. The booms of shells landing could be heard nearby.

Williams said it was clear that Ukraine’s fight for freedom could be long and dangerous.