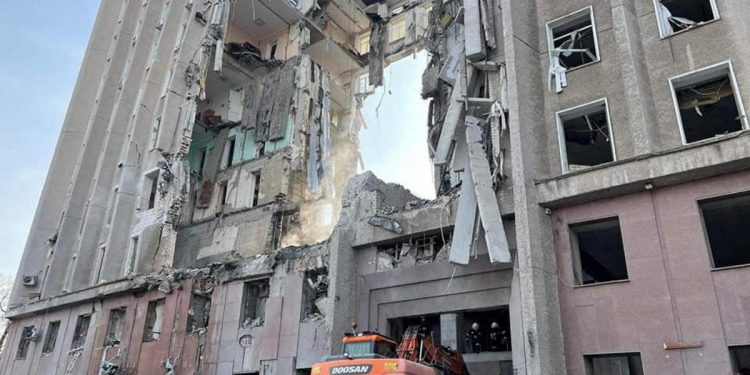 Kyiv — Russia’s unrelenting bombing campaign in Ukraine is fueling skepticism about Moscow’s claim that it will “drastically reduce” its military operations in two areas of the country to “increase mutual trust” and encourage peace talks. Despite the ongoing negotiations, the war continues.

As of Wednesday, the United Nations said it had driven more than 4 million people to flee Ukraine, upending their lives and making them refugees. At least 6 million more Ukrainians have been forced to leave their homes to seek safety elsewhere inside the country.

As CBS News correspondent Debora Patta reports from the capital city of Kyiv — one of the areas where Russia said it would scale back its assault — U.S. military officials see President Vladimir Putin’s latest move more as a repositioning of forces than a retreat, and in Kyiv and elsewhere, the threat remained high on Wednesday.

Boardroom discussions like Tuesday’s peace talks in Turkey mean little on the battlefield. Patta says Ukrainians are not letting their guard down, with soldiers continuing to patrol checkpoints around Kyiv, on high alert as they search for Russian saboteurs.

With shelling still heard north of the capital on Wednesday morning ,it was clear that the danger still lurks on the ground, and in the sky.

“The enemy is still here,” President Volodomyr Zelenskyy told his country on Wednesday night, after Russia’s announcement. “Missile and air attacks have not stopped… that’s the reality.”

Few places have felt that more than the southeastern port city of Mariupol, which has all but collapsed. Even if peace is given a chance, all that’s left of Mariupol is rubble and ruin.

Children from the besieged city, and many others like it in Ukraine’s south and east, want their childhoods back.

“I’m so tired,” said one little girl. “And my toys have no batteries in them.”

“What else can I do,” asked Genaidy as he gathered what he could from his damaged apartment to flee Mariupol. “There’s nothing left for me here.”

He’s walking away after nearly 40 years working as a shoemaker in the city.

Russian-backed separatist fighters in eastern Ukraine — where the war now raging had simmered quietly since Putin’s last invasion in 2014 — are in no mood for peace. Video emerged showing rebels forcing Ukrainians to strip down, claiming they were searching for Nazi tattoos.

In nearby Mykolaiv, a Russian rocket ripped through a government building on Tuesday, leaving a gaping hole, and fresh trauma. One woman watched helplessly as her colleague died in her arms — one of 12 people killed in the strike according to Ukraine’s State Emergency Service.

Even if the Russian military does make good on its promise to pull back from Kyiv, in the towns around the capital, where fierce battles have been raging, there’s not much left to fight for.

While Ukraine claims to have retaken nearby towns like Irpin, those areas have been decimated, and many people did not make it out alive.

The U.K. said Wednesday that its latest intelligence did show some Russian troops pulling back from the outskirts of Kyiv into Belarus and Russia, “to reorganize and resupply” after suffering heavy losses. The Ukrainian government said it expected Russia to retain some troops near the capital, to keep the pressure on and prevent Ukraine’s forces from heading to the eastern front, where the war is still raging.

Zelenskyy, along with the U.S. and his other Western partners, have made it clear they’ll believe Russia’s claim to be easing the assault on Kyiv and the northeastern city of Chernihiv when they see it happen, and not before. Thirty-five days into an invasion that Putin insisted for months he had no intention of launching, the skepticism was unsurprising.