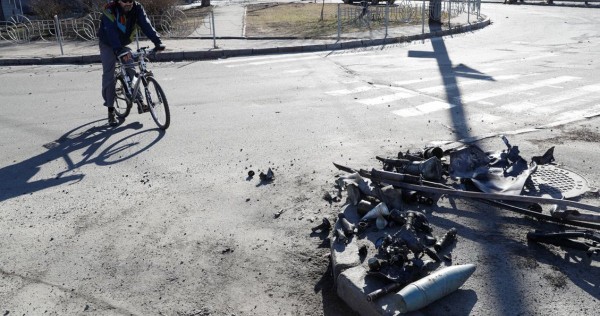 WASHINGTON – Russian forces are becoming increasingly frustrated by what the United States believes is a viable and very determined Ukrainian resistance, as Moscow commits more and more troops to its invasion, a senior US defence official said on Saturday.

The official, who spoke on condition of anonymity, also said it appeared Russian commanders did not plan for enough fuel and basic logistics support, and were now trying to adjust.

The Russian military continued to pound Kyiv and other cities with artillery and cruise missiles on day three of a campaign that has sent hundreds of thousands of Ukrainians fleeing west toward the European Union, clogging major highways and railway lines.

But a defiant President Volodymyr Zelenskiy said the capital Kyiv remained in Ukrainian hands. Authorities there handed thousands of assault rifles to residents and told citizens to make petrol bombs as they prepared to help repel the invaders.

“We know that they have not made the progress that they have wanted to make, particularly in the north. They have been frustrated by what they have seen is a very determined resistance,” the official said, declining to explain the sources of US intelligence behind that assessment.

“It has slowed them down,” the official added.

The Kremlin, which calls its actions in Ukraine a “special operation”, has said it paused its offensive on Friday in anticipation of talks with Kyiv that never happened. It said its troops would start advancing again on Saturday. Ukraine’s government said Russia never paused its attack.

The US defence official estimated Moscow had now deployed into Ukraine more than half of the over 150,000 troops it had arrayed around the country prior to the invasion, up from a previous estimate of 30 per cent just a day earlier.

The United States believes Russian forces were now 30 km (19 miles) north of Kyiv — but that could change at any time, the official said.

“(They) have not gotten any closer than that,” the official said.

The US official estimated that Russia had fired more than 250 missiles, mostly short-range, at Ukrainian targets, some of which hit civilian infrastructure.

Russia has said it does not intend to occupy territory but to destroy its southern neighbour’s military capabilities and capture individuals it regards as dangerous nationalists. Kyiv and its Western allies call that baseless propaganda.

Russian President Vladimir Putin has warned against foreign interference, and US President Joe Biden has ruled out sending American troops to Ukraine to defend a pro-Western partner that is not a member of the NATO military alliance.

But the United States and its allies have announced rounds of additional military assistance, and on Friday Biden told US State Department officials to release to Ukraine up to an additional US$350 million (S$473 million) worth of weapons.

The US defence official said a previously unannounced US arms shipment had arrived in Ukraine in recent days, the first, apparently, since Russia invaded.

“I can confirm for you that they have received security assistance from us just within the last couple of days,” the official said, without elaborating.