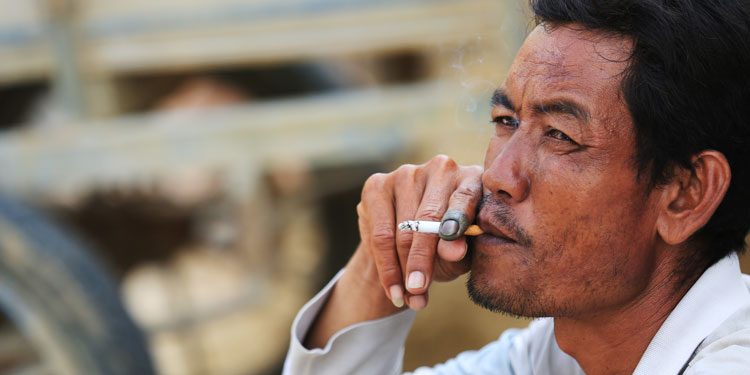 There are renewed calls for the Cambodian government to increase the current level of tobacco taxes to assist its continued aim for year-on-year rises in state revenue that recently fell because of COVID-19.

The UN Development Programme (UNDP) restated that the Cambodian government should increase tobacco taxes to eventually fall in line with the World Health Organization’s (WHO) guideline to represent 75 percent of retail prices.

It is estimated if the government raised taxes to 75 percent of retail prices it would result in $45 million in additional annual state revenue – currently estimated at around $15 to $20 million.

The current tax structure consists of an ad valorem (according to value) excise tax equal to 20 percent of 90 percent of the cigarette invoice price, a value-added tax of 10 percent, Public Lighting Tax of 3 percent and import tariffs ranging from 7 to 35 percent.

“Scaling up taxes to represent 75 percent of the retail price outlined by the WHO guidelines would generate additional health and revenue gains for Cambodia,” it added.

According to the Southeast Asia Tobacco Control Alliance in the Asean region, Thailand currently has the highest tobacco tax as a percentage of retail price (70 percent), followed closely by Singapore (67.5 percent) and Indonesia (62.71 percent)

According to Cambodia’s 2019-2023 Tobacco Tax Roadmap submitted by the WHO the plan would see a gradual elimination of the ad valorem component and replaced with a specific excise tax rising at approximately 200 riels annually, until the tax share reaches the 75 percent share of the retail price.

It is estimated that if the Cambodian government was to follow these changes it would result in an additional $225 million during the first five years after its implementation, representing $45 million annually.

He added, however, any decision would not just be solely based on increasing state revenue but also on preventing health issues.

“Any decision to increase the current level of taxation for tobacco products, on what we call the excise duty would not just be for the purpose of increasing state revenue share,” he said.

“We would also need to balance any excise increase with the prevention of health issues for current and potential future tobacco users,” he added.

Khmer Times attempted to contact the British American Tobacco in Cambodia but could not get an immediate response because of the Independence Day holiday. The company’s spokesperson has previously commented that any increase to taxes will ultimately result in decreased revenue for tobacco producers.

“Any tax increase will have an impact. The price of the product as a whole will go up  and, if the price increases, then sales will probably go down and the revenues for tobacco companies will decrease,” the company has previously said.