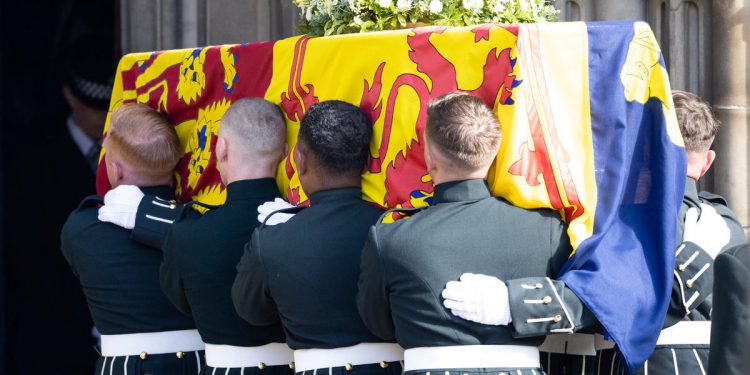 London — Mourners were lined up Tuesday in Scotland’s capital to try and pay their respects in person to Queen Elizabeth II, as the late monarch lied in state in Edinburgh’s St. Giles’ Cathedral. Later Tuesday, the queen’s coffin was to be flown to London aboard a Royal Air Force C-17 Globemaster, accompanied by her sister Princess Anne, and then brought to Buckingham Palace.

Lines were already forming in central London, meanwhile, with hundreds of thousands expected to wait hours for an opportunity to see the queen’s coffin later this week as it lies in state at Westminster Hall.

Two women, Grace and Vanessa, said they had already taken their place in the line, waiting overnight to pay their respects a full day before the queen’s coffin was even due to arrive at Westminster.

“This morning, we went to the actual rehearsal of her majesty’s coffin going into Westminster Hall. It was heartbreaking, the solemnness of the occasion,” Grace told the BBC. “I think the whole nation is going to be heartbroken and in floods of tears. We were.”

“This is the way we want to pay respect to the queen, who has done a great service to the country and the commonwealth and the world,” Vanessa said.

Upon the departure of the queen’s coffin from Scotland on Tuesday afternoon, a Guard of Honor will give the monarch a final royal salute, and the band of the Royal Regiment of Scotland will play one verse of Britain’s newly-updated national anthem.

After the coffin touches down at a British Air Force base west of London on Tuesday afternoon, it will be transported by hearse to Buckingham Palace in the heart of the capital. On Wednesday, the queen’s coffin will be moved the short distance from the palace to Westminster Hall, where the late monarch will lie in state until her state funeral on Monday.

King Charles III, alongside his wife Camilla, the queen consort, were visiting Belfast, Northern Ireland on Tuesday. They will meet politicians and religious leaders and attend a service at St. Anne’s Cathedral before returning to London later in the day.