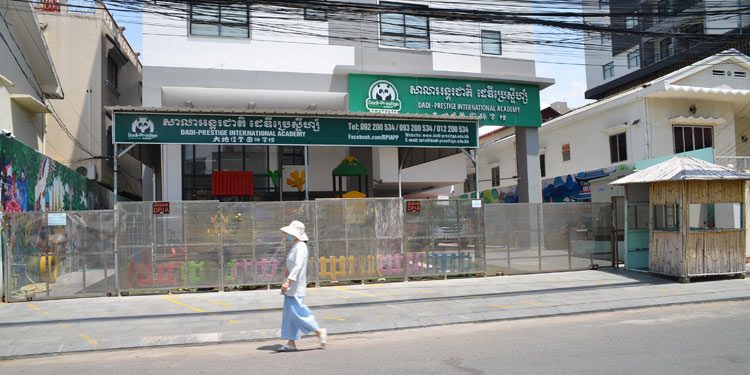 The president of the Federation of Education Services in Cambodia (FESC) has said that the government needs to expand the scope of its COVID-19 response package to include the private education sector.

The call comes after reports of drastic salary cuts in the sector that threaten both the schools and their staff’s ability to effectively educate their students.

Pech Bolen, president of Westline Education Group and president of FESC, told Khmer Times that while he agrees with the governments need to prioritise and support COVID-19 affected sectors such as tourism, garment workers, construction and agriculture – the private education sector needs desperate financial help too.

“If the private education sector does not receive any special funds from the government, the government should at least expand the SME loan scheme to include the schools with flexible repayment conditions.

This is to allow the sector to stay in business, help sustain the economy and keep workers employed, especially until physical classes can resume,” Bolen said. According to Bolen, because schools are having to conduct e-learning courses, many have claimed a major drop in revenue of around 50 percent, in turn, leading to many private schools having to cut staff and staff salaries considerably just to afford basic utilities, rent and the upgrade in technology infrastructure to support e-learning.

“Because students are no longer coming to school, about 20-30 percent of profit is being lost from extra costs usually associated with physically coming to school. Such as bus fees, food, uniforms, books and other administration fees to support the business model. We are then losing another 20 to 30 percent in school fee discounts and dropouts. This is how we get to losing 50 percent,” Bolen said.

“We have already had to cut our staff salaries now up to 60 percent in order to sustain the financial viability of the school. Our priority expense now is our teachers, the buildings rental fee, utility and maintenance bills and investment in e-learning equipment,” Bolen added.

The private education systems financial woes have played out in a real-world example for Terry Williams who has found himself out of pocket because of school closures.

Williams has worked as a kindergarten English teacher at the New Gateway International School in Phnom Penh since July 2019 and reached out to the Khmer Times this week to explain what has happened to his employment during the COVID-19 pandemic.

The English teacher stated that he and his other teachers at the school were asked to sign contacts cutting their salaries by 50 percent, bringing the English teacher’s monthly salary from $1,200 per month to $600.

“The contract that they [the school] asked us to sign, clearly states in Khmer, English and Chinese that we are to receive half of our full [$1,200] salary on the 15th of April. However, they [the school] only gave us a third [$400] of this amount,” Williams said.

“We were then sent a letter [that this publication has also seen] stating that because of the low number of young students enrolled in the e-learning programme the school is suspending the kindergarten programme for three months effective from April,” Williams added.

When Khmer Times contacted the New Gateway International School, we were told that the school has not cut the salary for previous months, but it does not know for this month.

It added that the school has closed the Kindergarten E-Learning programme because children at this age cannot cope with its difficulty, being very young. However, the E-Learning from grade one to grade 12 is open as normal. However, things do not look like changing anytime soon, after Prime Minister Hun Sen said last week that he has agreed to extend school closures following a request by the Ministry of Education that they should not reopen until November and this date is only dependent if the COVID-19 situation in the country and the world has improved significantly.

A nurse struggled with Covid-19 trauma. He was found dead in his car