Cristiano Ronaldo and Lionel Messi are the two best players in the world in this era. 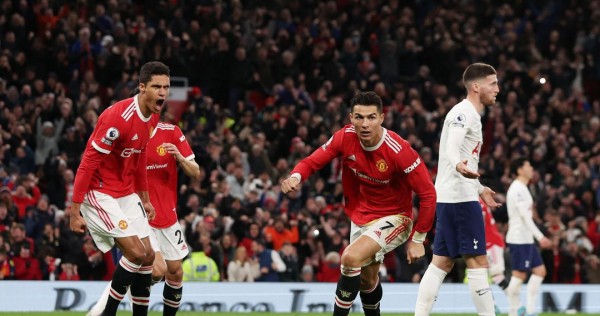 Luis Diaz connected with a fine ball from Joel Matip to head Liverpool ahead in the 19th minute before Mohamed Salah scored from the spot, following a handball by Yves Bissouma, for his 20th goal of the season.

“Difficult game, good opponent, we needed a few minutes to find into the game. From the moment on when we found ourselves into the game, we controlled it in a really good way,” said Liverpool manager Juergen Klopp.

Pep Guardiola’s City side have 69 points with Liverpool on 66 but City can restore their advantage to six when they travel to Crystal Palace on Monday.

After a week of speculation over his happiness as part of Ralf Rangnick’s regime at United, Ronaldo responded in emphatic fashion — in front of the recently retired NFL quarter-back Tom Brady.

Ronaldo put United ahead in the 12th minute with a spectacular long-range blast from over 20 metres out but a Harry Kane penalty brought Spurs level in the 35th minute.

Three minutes later though, the 37-year-old had restored United’s advantage, slotting home after Jadon Sancho had broken the offside trap and set up the Portuguese forward with a low cross.

Spurs restored parity in the 72nd minute with an own goal from United captain Harry Maguire who slid in a low cross from Sergio Reguilon.

But Ronaldo, who had twice tested Spurs keeper Hugo Lloris after the break, settled the contest with a header from an Alex Telles corner nine minutes from the end.

It was the 807th goal of his career, laying claim to professional football’s all-time leading scorer record.

Spurs manager Antonio Conte conceded one player had simply been the difference.

“Cristiano Ronaldo and Lionel Messi are the two best players in the world in this era. When you play against this type of player, they’re decisive. Without Cristiano Ronaldo, for United it wouldn’t have been a good night,” he said.

The result moves United two points above Arsenal and back into fourth place, although the Gunners have four games in hand starting with Sunday’s home match against Leicester City.

Brentford’s in-form striker Ivan Toney scored a brace to bring up five goals in his last two Premier League games, as the promoted side beat struggling Burnley 2-0 to move further away from the relegation zone.

Toney, who netted a hat-trick in Brentford’s 3-1 win over Norwich City last time out, headed in a superb left-footed cross from playmaker Christian Eriksen to put his team ahead in the 85th minute.

His second goal in stoppage time was a powerful penalty following a foul by centre back Nathan Collins, who was shown a straight red card for a clumsy tackle inside the penalty area.

The result moved Brentford nine points above the drop zone in a boost to their quest to remain in the English top-flight while 18th Burnley suffered their third straight defeat.