Pregnant nurse suspected of having Covid-19 dies in Surabaya hospital 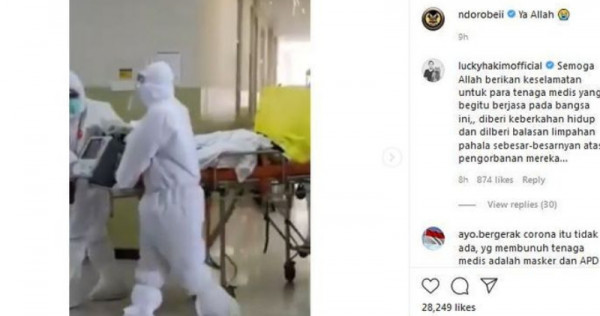 Ari Puspita Sari, 26, had been working at Royal Hospital for a little over a year treating non-Covid-19 patients.

According to hospital spokesperson Dewa Nyoman Sutanaya, Ari was admitted and treated there for three days after showing symptoms of Covid-19. As her condition kept deteriorating, she was referred to Dr. Ramelan Navy Hospital (RSAL), also in Surabaya, on Friday.

She reportedly passed away at around 10.50 am on Monday, along with her unborn baby. At the time of her death, her swab test result had not been issued, but “RSAL helped with the burial using Covid-19 protocols,” Dewa said as quoted by tribunnews.com.

Her death was confirmed by Indonesian Nurses Association (PPNI) chairperson Harif Fadhilla on Monday, who also reported the current number of nurses who have contracted by the disease.

“Twenty nurses nationwide have died of Covid-19,” he said as quoted from kompas.com.

Fifty-nine nurses have been confirmed to have Covid-19, while 48 others are suspected of having the disease.

“The data might not be factual as [the patients stepped forward] voluntarily. There might be many nurses who do not report their status,” he said, indicating that the actual number of nurses with Covid-19 might be bigger than the collected data.

“I heard the sad news about Ari Puspita Sari, a nurse at the Royal Hospital Surabaya who passed away with her baby,” he wrote. “My heart goes out to Ari, doctors and other medical workers, as well as those who work on the frontline, battling Covid-19.”

A 52-second video showing a patient being taken to a hospital isolation unit by medical staff in hazmat suits previously went viral on social media.

The video, posted by a Facebook user named Bayou Prakoso on Facebook on Monday, was captioned: “A nurse of Royal Hospital in Surabaya, positive for Covid-19 and four months pregnant, has little chance to survive as she already depends on a respirator. Please pray for this mother and her baby.”

Several other medical workers were seen calling Ari’s name from afar as she was wheeled into an elevator under tight Covid-19 protocols.

Several hours after the video went viral, East Java Governor Khofifah Indar Parawansa posted a picture of the nurse on her official Instagram account, announcing that she had passed away.

“Another medical hero from East Java has passed away. Me, personally, and the East Java administration send our hearts to her and we thank her for her work,” she wrote in the post.