Prayers for the dead as Myanmar’s young jade miners mourned 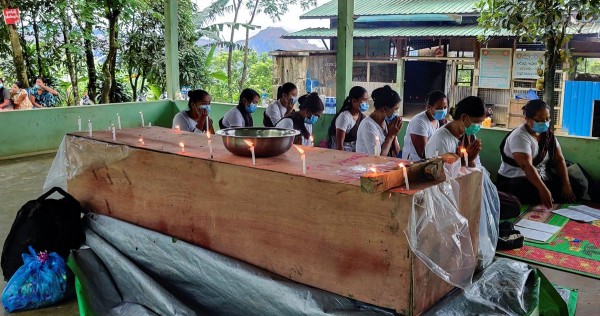 University student Saw Myint Tun travelled hundreds of miles from home in February to work the jade mines of northern Myanmar in search of gems that might transform his family’s modest fortunes.

Instead, they offered funeral prayers for him there on Saturday, lighting candles on a plywood coffin and chanting Buddhist sutras for the 21-year-old, one of more than 170 people killed in a landslide on Thursday.

The miners were hunting for precious stones in Hpakant – the centre of Myanmar’s secretive billion-dollar jade industry – when a wave of mud and water crashed onto them, entombing them under a layer of mud.

More than a dozen miners were cremated in Hpakant on Saturday, while 41 were buried in a mass grave. Seventy-seven were buried on Friday.

Thursday’s disaster, the worst in memory, highlights the perils of the trade, which draws impoverished migrants from across the country seeking to make their fortune.

It is not uncommon for university students to work in the mines gathering pocket money for the next semester. Officials said the victims were freelance jade pickers who scoured tailings, the residue from mining, for stones missed by larger operators.

Myanmar supplies 90 per cent of the world’s jade, the vast majority exported to neighbouring China. Rights groups say the industry is riddled with abuses. Scores are killed every year.

Like many others who died, Saw Myint Tun was from Rakhine state, his brother-in-law, Hla Shwe Win, told Reuters.

Rakhine, one of Myanmar’s poorest regions, is the state from which more than 730,000 Rohingya were forced to flee for neighbouring Bangladesh after a military crackdown in 2017 that the UN has said was executed with genocidal intent. Myanmar denies committing genocide.

Now it is the site of an escalating war between Arakan Army rebels, who seek greater autonomy for the region, and government troops.

Hla Shwe Win said one of his brothers had died in the disaster, while another was wounded.

They had followed him to Hpakant to work in the mines, he said, as women wept over the coffin before it was burned in line with Buddhist traditions.

“They came here, counting on me,” he told Reuters, saying there were no words to describe how he felt.

Of course, Family Mart in Japan is introducing robot cashiers