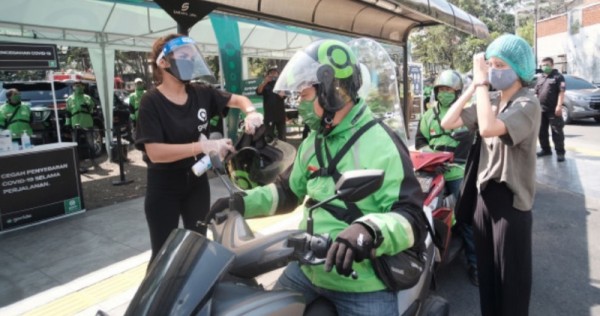 The Jakarta Police are teaming up with groups of ojek (motorcycle taxi) drivers working with ride-hailing services to curb health protocol violations across Indonesia’s capital.

Jakarta Police chief Inps. Gen. Fadil Imran said they had partnered with some 8,000 drivers as part of the “Covid-19 hunter” team.

“We have partnered with online ojek communities to crack down on violations. There are more or less 8,000 drivers in these groups,” Fadil said on Thursday (Dec 17) as reported by kompas.com.

He said public participation was necessary to curb coronavirus transmissions in Jakarta, expecting that the drivers would also help authorities prevent crowds from gathering.

“On average, we saw 1,500 new confirmed cases in Jakarta every day while the number of active cases also continued to rise. This means that the Covid-19 transmission rate in Jakarta is still very high, so it is necessary to include everyone

The team is also tasked with tracking confirmed cases and taking them into quarantine.

“The team will look for residents who have tested positive for Covid-19 and send them to the Covid-19 emergency hospital at Wisma Atlet in Central Jakarta or any Covid-19 referral hospital,” he said.

Engaging app-based ojek drivers is nothing new for the Jakarta Police.

Nana, at the time, had partnered with 80 ojek communities consisting of more than 10,000 drivers. Nana also named 100 drivers to be in charge of reminding fellow drivers in Greater Jakarta to follow health protocols.

Nana himself was removed from his post a month later due to failure in carrying out orders to enforce health protocols. He was transferred to the National Police headquarters as an expert staffer to the police chief.

Although the National Police did not provide details on the decision, the dismissal followed a series of mass gatherings in and near the capital city centered around the return of firebrand cleric Rizieq Shihab last week.

Elsewhere outside Jakarta, police have established similar Covid-19 hunter teams, the tasks of which vary.

East Java Police, for instance, formed a team to track down people who were confirmed or suspected of having Covid-19 but had broken quarantine in April, in response to reports of Covid-19 patients escaping from hospitals and refusing to undergo quarantine.

In Bandung, West Java, police, along with the military, local administration and local public order agency, established a Covid-19 hunter team in September to patrol the city and remind the public to comply with health rules.

US FDA authorises Moderna’s Covid-19 vaccine for emergency use