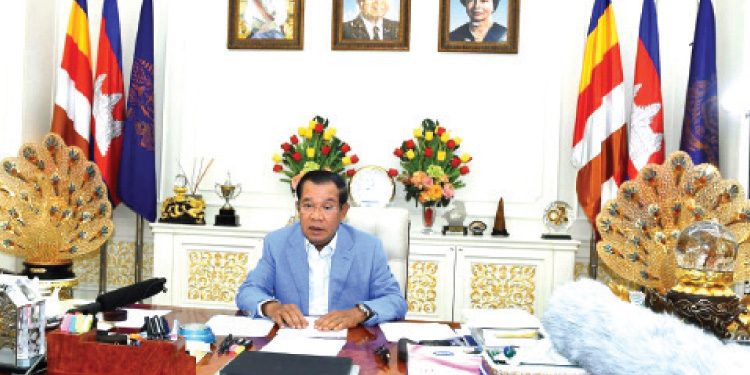 0
SHARES
5
VIEWS
Share on FacebookShare on Twitter
In a special statement broadcast live to the nation yesterday, Prime Minister Hun Sen detailed a series of reasons why Cambodia can be positive heading into 2021.

Mr Hun Sen reaffirmed the positive trend in exports achieved in 2020, confirming a total trade volume of some $32 billion. He also said that exports were recorded at around $16 billion.

The Prime Minster said the government has collected $5.3 billion in combined tax revenues so far in 2020, despite the Kingdom’s economy feeling the impact of COVID-19 amid the ongoing global pandemic.

He reported that domestic tax revenues rose to $2,878 million in December 28, one percent higher than the year’s plan, but also stated that customs and excise revenue were below their target, having reached US$2,391 million.

However, the Prime Minister did note that with three more days left before the end of this year, that overall revenues were expected to increase to $5,300 million.

The Prime Minister also shared that the Kingdom currently holds 44.400 tonnes of gold in reserve, ensuring a sustainable macro-economy in the country.

About 12.400 tonnes of gold are a legacy from the late King Norodom Sihanouk’s era and are stored in Switzerland. 17 tonnes are invested in the UK’s central bank and 15 tonnes are kept at the National Bank of Cambodia, according to the Premier.

The special message, which was broadcast from his residence in Takhmao city, Kandal province yesterday, came before an additional Facebook message hailing the first extraction of crude oil in Cambodian waters.

In his Facebook post, the Prime Minister said: “The first drop of oil has been produced. This is a new achievement for Cambodia’s economy. The year 2021 is coming… and we have received a huge gift for our nation, the first oil production in our territory.”

Once the drilling programme is completed in February 2021 – in an area off the southwestern coast of Sihanoukville – a peak production rate of 7,500 barrels a day is expected.

In 2017, the government estimated that the nation would take in at least $500 million in royalties and taxes from the first phase of the project.

This article was first published in Khmer Times. All contents and images are copyright to their respective owners and sources.
Tags: CambodiaHun SenKandalPM Hun Sen
Previous Post

Historic day for Cambodia as Apsara oil is now flowing