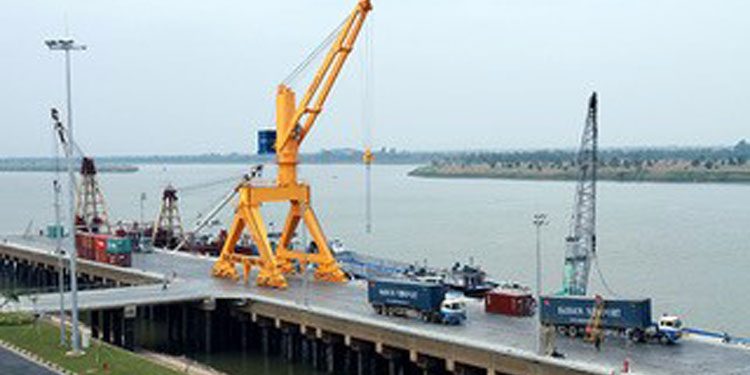 A TEU is an inexact unit of cargo capacity, often used for container ships and container ports. It is based on the volume of a 20-foot-long (6.1 metre) container, a standard-sized metal box which can be easily transferred between different modes of transportation, such as ships, trains and trucks.

The launch ceremony was held on Sept 20 in the presence of Sun Chanthol, minister of Public Works and Transport. Construction of the $18.4 million container terminal was started in 2019 and finished in mid-2021, said Hey Bavy, director -general of PPAP. It covers 2.75 hectares of land and is capable of handling 100,000 TEUs of containers per year, he said.

The budget for the investment expanding container terminal is from savings of PPAP and from an  issuance in the securities market.

“The number of containers handled at the port has significantly increased so we have to build new infrastructure to handle the ongoing growth of container traffic at the port,” Bavy said.

Chanthol said the government will try to seek funds to develop the infrastructure sector and facilitate the transport of goods and products from Cambodia to abroad and vice versa.

“Inland waterway transport is very important and the Ministry of Public Works and Transport has expressed its support and the efforts to promote more inland waterway transport to reduce traffic accidents and reduce transportation costs of goods as well as to reduce road damage,” Chanthol said. According to Bavy, PPAP plans a new project expanding the container terminal by upgrading capacity to 500,000 TEUs per year. Construction of this project is designed to start in 2022. With ongoing growth of container traffic, PPAP is setting a goal of upgrading capacity to 900,000 TEUs per year, he added.