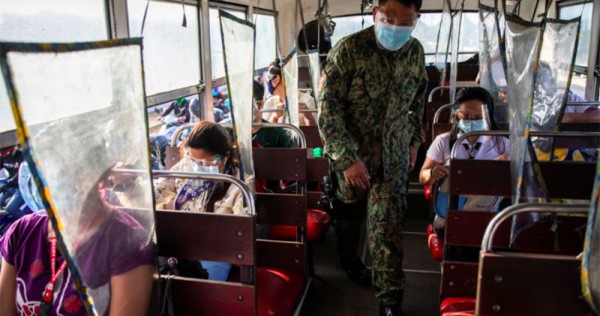 MANILA – The Philippines will push through with its plan next week to ban from public transportation people who are not vaccinated against Covid-19, officials said on Friday, as the country grapples to quell a surge in infections.

The ban applies to the notoriously congested capital region of about 13 million people, where most new cases have emerged, but has faced stiff opposition from the country’s human rights commission, which called it restrictive and discriminatory.

But the transport ministry on Friday said there would be no stopping the plan, which was necessary to curb the spread and prevent the healthcare system from getting overwhelmed.

The Philippines has fully vaccinated about half of its 110 million population.

Though nearly all qualified residents in the capital region have been inoculated, authorities say there are many unregistered migrants there, while children and some elderly have not been vaccinated.

The Philippines saw 37,207 new infections on Friday, a new record for a fifth time in two weeks. So far, 3.12 million people have been infected and more than 53,000 have died from Covid-19 in the Philippines.

The transport ban follows a threat last week by President Rodrigo Duterte to arrest unvaccinated people. The interior ministry this week ordered community officials to list all those who have not received a vaccine.

The order could lead to infringements on privacy rights and other human rights violations, according to Leila De Lima, a detained senator and critic of Duterte, who likened the lists to those used to identify drug addicts, many of whom were mysteriously killed during the president’s war on drugs.