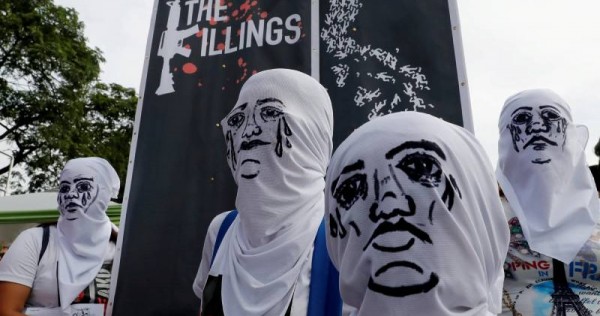 The Philippine government has condemned a European Parliament resolution threatening the withdrawal of trade privileges unless Manila releases a jailed senator and investigates the unresolved killings of thousands of drug suspects, unionists, lawyers and activists.

The Philippine Department of Foreign Affairs called the resolution a “misguided” attempt to interfere in the upcoming Philippine election, while Trade Secretary Ramon Lopez said it was based on “fake news”.

The European Parliament’s resolution, approved on Feb 17 by 627 of its 705 members, directs the European Commission — the executive branch of the European Union — to “set clear, public, time-bound benchmarks for the Philippines to comply with its human rights obligations”.

In addition to demanding the investigation of extrajudicial deaths linked to President Rodrigo Duterte’s war on drugs, it called for the “immediate and unconditional release” of opposition Senator Leila De Lima, a critic of Duterte who is running for re-election to the senate in the May polls, despite being in jail in what many people believe is a politically motivated case.

The resolution also called for “an end to the persecution” of the Nobel Prize winning journalist Maria Ressa — another Duterte critic — and an end to the use of “troll armies” to spread disinformation ahead of the polls, which will also decide the country’s next president.

If the Philippines fails to act on these points, the parliament threatened, the EU should withdraw the zero-tariff privilege that Philippine export companies enjoy under its Generalised Scheme of Preferences Plus (GSP+) programme.

Philippine Trade Secretary Ramon Lopez expressed confidence this weekend that this would not happen, insisting that the country was “compliant” with 27 international conventions on human rights, labour, environment and good governance” required under the GSP+.

He branded the allegations behind the resolution as “fake news …

“Today we salute the senator’s courage. Her rights to due process must be respected,” Borrell said in a speech read for him by the EC Commissioner for Equality Helena Dalli.

The Department of Foreign Affairs branded the resolution as “largely baseless, prompted by European supporters of libelous journalists”, in what appeared to be a reference to Ressa.

Philippine trade officials cautioned the EU against withdrawing the trade perks, which cover 6,200 Philippine products, warning doing so could affect the country’s economic recovery and hit the poor.

In 2020, the trade privilege covered some 1.6 billion euros (S$2.4 billion) worth of exports from Manila. This benefitted not only large companies but also marginalised farmers, fishermen and workers too, Lopez said.

This is not the first time the European Parliament has approved such a resolution. Allan Gepty, the assistant secretary for trade, said similar resolutions were issued in 2016, 2017, 2018 and 2020.

However, on each occasion, the EU ultimately failed to act on the parliament’s resolution, a source in the diplomatic community told the South China Morning Post.

In 2020, when the withdrawal of the trade perks appeared imminent, the Management Association of the Philippines issued an appeal warning the move would raise unemployment “among our countrymen at a time when they most need jobs”. The matter was subsequently dropped.

However, it said the European Parliament was “an important forum for political debate and decision-making” and noted that it had raised similar concerns in the past.

The Delegation added that the GSP+ monitoring mission next week would provide “an opportunity to engage government and civil society directly”.

In 2017, President Duterte publicly rejected trade-related technical aid worth 6.1 million euros because this was tied to the investigation of extra-judicial killings in his drug war.

At that time, he told the European Commission: “Keep your money. Do not meddle with the sovereignty of my country. Do not impose conditions.”

On that occasion too the differences appear to have been quietly patched up. According to the commission website, it is set to provide 13 million euros in “humanitarian aid” to Manila this year.

It has already provided 153.5 million euros worth of aid since 1996 for disasters, disaster preparedness and to address the conflict in the Muslim south.

Will a presidential election mark the end of South Korea’s tattoo taboos?