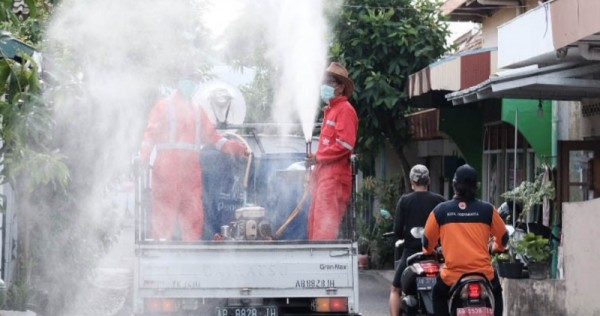 It has been almost eight months since President Joko “Jokowi” Widodo announced the first Covid-19 cases in Indonesia in March. Since then, people have gotten used to the “3M” health protocols: memakai masker (mask-wearing), mencuci tangan (handwashing) and menjaga jarak (social distancing).

Amid the robust health protocol campaign, data shared by the national Covid-19 task force show that many people neglected health protocols during the recent long weekend.

The task force’s data and information technology head Dewi Nur Aisyah said in a virtual press conference on Wednesday that they received more reports of health protocol violations during the latest national holiday from Oct 28 to Nov 1 compared to normal days.

The reports were submitted by field officers, which comprise the Indonesian Military (TNI), the National Police (Polri) and Public Order Agency (Satpol PP), in 407 regencies and cities as well as 34 provinces.

Based on the data, there were 600,000 daily cases when people were discovered to have violated the health protocols at tourist spots during the holiday.

Moreover, the data also show that over 1 million people at tourist spots were being monitored for violating the protocols.

Dewi said the rate of adherence to the mask-wearing policy on Oct 21, a week before the holiday, was 88.62 per cent. However, the number decreased to 88.5 per cent on Oct 28.

On weekends, the percentage is even lower. According to the data, on Oct, 24, the rate of compliance to the mask-wearing policy at tourist spots was 89.09 per cent, and it went down to 86.35 per cent on Oct 31, during the long weekend.

Dewi conceded that the rate of public compliance with the mask-wearing policy was very good with an average of above 80 per cent.

“This means that people have gotten used to wearing masks when going outside. However,

She explained that field officers were not only monitoring people’s adherence to health protocols, but they were also responsible for educating them about the importance of following the protocols.

The government has expressed concerns about the possibility of a spike in Covid-19 cases following the long holiday.

In addition to campaigning about the health protocols, the task force implemented several measures in collaboration with the central government and local administrations ahead of the holiday, including launching the quarantine supervision program, issuing the electronic health alert card and installing facilities and equipment at ports and airports to support the coronavirus health protocols.

“We have also implemented anticipatory measures at the hospitals. [We] are coordinating with local health agencies and [health] facilities and have readied facilities and infrastructure at [referral] hospitals,” said Wiku Adisasmito, the task force spokesperson and expert team coordinator, on Tuesday.