Pchum Ben, Cambodia Buddhist Festival : A drop in sales and a rise in prices 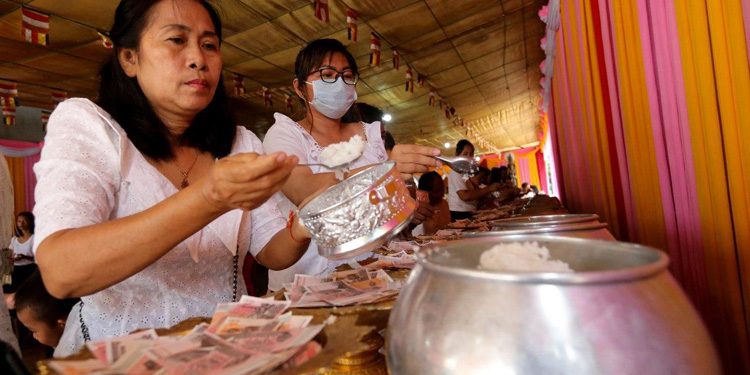 Pchum Ben Festival has now begun and Phnom Penh market stalls have seen a drop in sales for clothing and kitchenware, causing a rise in prices.

Pchum Ben – Ancestors’ Day – is the biggest religious festival for Cambodian Buddhists to pray for their dearly departed relatives.

The whole ceremony takes up 15 days and this year’s Pchum Ben runs between Sept 3 and 18 with the public holidays being Sept 16, 17 and 18.

The festivities involve families dressing up and going to their usual family pagoda to pray and give food.

Because of this, businesses usually look forward to this holiday because people will come to buy new clothing and kitchenware to use over the festival.

However, shop owners at both Orussey market and Central Market reported a drop in sales this year. Eight shopkeepers said they have seen a decrease in sales so have had to raise their prices slightly.

They believe this is because people are being more wary with their money because of salary decreases after COVID-19 struck.

Khin Sokunthea, a market stall owner, selling Khmer-style clothing at Orrusey Market, said: “We have seen a drop in sales by around 30 percent. I think people are using the clothes they already have from the previous year. I have had to put my prices up by around 20 percent to try and even things out a little.”

Although prices have been raised by 20 percent, it didn’t seem to put off the few shoppers present at Orrusey Market.

One shopper who did not wish to be named explained she had paid close to $50 for her outfit, whereas last year she had only paid around $40.

“I can understand why prices have gone up. Things have changed a lot since the pandemic. The sellers need to put food on the table and my family needs new clothes to go to the pagoda,” she said.

At Central Market, a kitchenware stall selling the usual Khmer style lunch boxes that people use to carry food to the temples was sat dormant.

“The markets have been very quiet like this for months. People just aren’t spending the money here like they used to. We expect at this time of the year to have more customers. Not only are we seeing a lack of tourist money because of COVID-19, but locals are also being shy with their cash,” said 53-year-old Bun Kompheak.

Even with a drop in sales, though, stall owners at each market still had a smile on their faces.

“This is a very special time of the year for Cambodia. This is a time we can get together with loved ones. It brings families together from all parts of the country,” Bun went on to say.

Pchum Ben is a public holiday in Cambodia that follows the period called “Vassa”, a kind of Buddhist Lent, and has been kept with great devotion by the Khmer people for longer than anyone can remember.

Pchum in the Khmer language means “coming together” and Ben means “a ball of food”. Buddhists believe that the spirits of their deceased ancestors will be freed when given offerings during Pchum Ben.